Toro Rosso duo blame one another 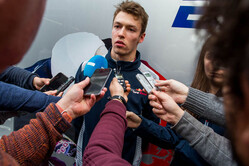 "The worst scenario that can ever happen is the collision between teammates on the first lap of the race," said the Austrian. "This should not have happened today."

The latest incident, which will only further compromise an already fractious relationship, saw Kvyat run wide at Becketts as he battled with his teammate who had passed him at the start. Rejoining the track, the Russian, still struggling to control his car, hit that of his teammate, eliminating the Spaniard on the spot.

"I knew already that I wouldn't be on the perfect line for Turn 12, where the collision happened," said Kvyat after the race, "because you're committed to the corner very fast.

"The racing driver knows when he sees what happens to me that you're never going to be on the perfect line for Turn 12," he continued. "So when you put yourself there, you know the collision is 90% unavoidable. I believe had the other car been anticipating it, it would have been trying to get me back on the next straight.

"But it didn't happen. You just put yourself there and say to your teammate 'OK, you just crash into me', that's what I believe happened, and I completely disagree with the penalty. Yes, of course the responsibility is on me also, but I think we both should be feeling responsible for what happened.

"I've spoken with James (Key), and we're both in agreement that we're both responsible for what happened," he revealed. "It's a bit of a shame. It's a misunderstanding."

Misunderstanding or not, though he clearly saw the incident slightly differently, Sainz wants the discussion kept behind closed doors.

"I'm not going to give any opinion about it because I think it's something that needs to be kept internally and to be analysed internally," he said. "I think the images speak for themselves so I'm not going to comment."

"We were battling, giving each other quite a lot of room, going into the fast corners, until one car lost control and hit the other one," he said. "It is something that will be discussed inside the team and I don't want generate any polemic, because I think the team has enough with two cars crashing out in the first lap."

Kvyat, who went on to finish 15th, also expressed surprise at the drive through penalty he received in the wake of the incident, the Russian also picking up a further 2 penalty points, thereby bringing his tally up to 9. The penalties come just a week after the incident in Austria which saw the Toro Rosso driver involved in an first corner incident which eliminated Max Verstappen and Fernando Alonso.

"I didn't leave the track," he said. "Me and the team both agreed on that, because the punishment was for leaving the track and rejoining the circuit."

Asked if he feels the Stewards are singling him out, he said: "I believe so. A drive-through is a drive-through, it's extremely strong. I saw stronger incidents and they punish five or ten seconds to the pitstop. For me I believe they should keep doing that.

"I don't understand this, and it doesn't feel very nice," he admitted. "It makes everything look a lot worse than it really was."