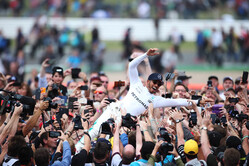 A dominant performance from Mercedes driver Lewis Hamilton means that he now equals the record for the most number of wins at the British Grand Prix. Hamilton won from pole after starting on supersoft and moving onto softs without losing the lead. The same supersoft-soft strategy was adopted by most of the other drivers.

An exception was his Mercedes team mate Valtteri Bottas who ran the opposite strategy by starting on the soft, gaining track position as others stopped, and then changing to the faster supersoft to make up more places at the end of the race.

Close to the finish of the grand prix, Ferrari experienced two issues on the front-left tyres of both Sebastian Vettel and Kimi Raikkonen. This caused a late pit stop for Raikkonen, who still finished on the podium, and Vettel to finish the race at reduced speed. The reasons behind this are currently being looked at together with the team.

Silverstone is one of the most demanding circuits of the year in terms of energy loads, with cars subjected to forces in excess of 5g. Nonetheless, the supersoft tyre, making its debut at the British Grand Prix, stood up well to these demands. Red Bull's Daniel Ricciardo, for example, started 19th on the grid after a penalty but ran a long opening supersoft stint to eventually finish fifth.

Mario Isola: "The British Grand Prix contained a sting in the tail for the two Ferrari drivers, with Sebastian Vettel and Kimi Raikkonen both unfortunately experiencing a tyre issue close to the hard-fought finish; that's a real pity and we'll obviously now look into exactly why this happened together with the team. The race was run at an incredible pace this year, with the fastest lap being nearly five seconds faster than the 2016 equivalent."

Lewis Hamilton won the race using one pit stop as we expected: although the strategy very much depended on the degradation rate of the supersoft. Starting on the supersoft, he moved to the soft on lap 25.