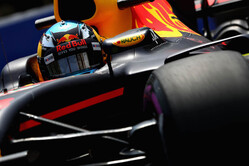 Amongst other things, Daniel Ricciardo has a new engine for today's British Grand Prix.

Starting from the back of the grid, alongside Fernando Alonso, after suffering a Turbocharger failure in Q1 yesterday, Red Bull opted to take advantage of the situation by changing the Internal Combustion Engine, Turbocharger, MGU-H and MGU-K on the Australian's car.

While most of these do not incur a penalty as they are within the allowed allocation, the new MGU-H does incur a 10-place grid drop, though even with this he will start ahead of Alonso.

"I think it was something to do with the turbo, that was the first noise I heard which didn't sound healthy," he said yesterday following the issue which caused the session to be red flagged.

"I have no idea how an engine works," he admitted, "but I know what a turbo sounds like... I think. That started making some really strange noises and I was losing power. Then from an engine safety mode point of view, everything switches off."