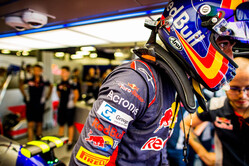 Carlos Sainz: "Quite a tricky Friday here at Silverstone. During this morning's FP1 session we assessed the balance of the car and also managed to make some good progress for FP2. Unfortunately, at the beginning of this afternoon's session, I was caught by the changeable conditions and the wind during my first run and had a little moment off track, which meant I couldn't complete many laps before putting the supersoft tyre on. Having said that, I think I managed to do a decent lap time which leaves us quite close to the top ten - we are not there yet and we still need to improve for tomorrow, but it's all coming together little by little."

Daniil Kvyat: "We did everything we had to do for today. FP1 was better than FP2, so there's still a bit of things to work on for tomorrow. The windy conditions don't make our job any easier but, overall, the car doesn't feel too bad even if it's not exactly where I'd like it to be. We think we know what to do to improve the car for FP3 and qualifying, so let's go for it at an always challenging Silverstone."

James Key (Technical Director): "A very different circuit here at Silverstone to where we've been recently; it's really the first proper high-speed corner dominated circuit of the year, so very interesting with these 2017 cars. It's also interesting regarding the tyre compounds, one step softer than what we had in Barcelona, which is traditionally not the case, but I think it's a good move from Pirelli and, after today's running, it proved to work well. In FP1 we had a few things to try and had our fair share of little problems to deal with too but, overall, we began to get into a rhythm of work with both drivers. Daniil felt a little bit more comfortable than Carlos with the balance of his car and put in some reasonable laps together. There's a balance between the low and the high speed performance here which needs to be struck right and that was one of the challenges for FP1.

"We then did some experimental changes in between sessions to see how certain directions could work out, splitting the cars' programmes a bit in FP2 to look at alternative ideas. This has given us some very valuable information for tomorrow, combined with what we learned in FP1. Carlos got caught out in Turns 12 to 13 on his first run on his soft set of tyres in FP2 - he was putting a good lap together at the time but it has proved to be a tricky corner for several drivers today and, unfortunately, he lost the car there. He did a good job of saving it without any major issues, but it meant that we lost the soft tyre set, so he ran a little bit less than planned in FP2. For Daniil, he went through his full programme and got some good high-fuel load data from both tyre compounds. There's now a bit of work to do and certainly a bit more performance to come. We've learned some good and important lessons today and we'll employ all of this into our set-up work overnight. It's a similar approach to that used in Austria, we go step by step and learn what we can from each run. We hope to put it all together tomorrow."