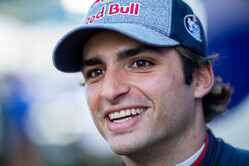 Passed over when Max Verstappen got called up to the 'big team', Red Bull in 2016, rather than lose heart, Carlos Sainz actually blossomed and is now widely regarded as one of the hottest properties on the F1 driver market.

Though linked with a number of teams, the Spanish youngster is a product of a driver programme that is loath to lose its young chargers, unless it is perceived they are not delivering.

With Red Bull looking set to retain both Verstappen and Daniel Ricciardo, Sainz faces what would be his fourth season at Toro Rosso, and the Spaniard clearly feels that if promotion is out of the question it's time to move on.

"My number one target is to be with Red Bull next year, fighting for podiums and wins," he told reporters at the Red Bull Ring today. "I am going to keep pushing for this. If that doesn't happen, a fourth year at Toro Rosso is unlikely.

Linked with a number of teams, Sainz insists that he is open to offers.

"I am not going to close the door on any opportunity," he said. "I am definitely ready to take a step forward in my career. I am ready. I am not closing any doors and we will see what happens."

At a time a number of driver contract are about to expire, there is much speculation linking the Spaniard with Ferrari.