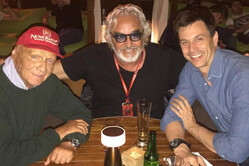 Coming, as he did, from the Benetton clothing empire, Flavio Briatore was always going to stand out alongside the numerous 'grey' team bosses and team principals that inhabited the F1 paddock when he entered the sport in 1988.

Over the years that followed, the ever-controversial Italian was forever in the headlines becoming one of the sport's key players and close friend and ally of Bernie Ecclestone.

His risk taking went a step too far after it was revealed that under his leadership Renault fixed the result of the 2008 Singapore Grand Prix, Nelson Piquet deliberately crashing in a bid to aid teammate Fernando Alonso.

Banned from the sport for his role in the scandal, the Italian subsequently successfully challenged the move and while he still manages a number of drivers, including Alonso, and regularly shares his views on the future of the sport, in the years since he has tended to concentrate on his other business interests.

With the sport about to enter the traditional silly season, and with a number of driver contracts on the verge of running out, what better time for the flamboyant Flav to make a reappearance, and what better way to grab the headlines than to tweet a picture of him enjoying dinner with Mercedes bosses Toto Wolff and Niki Lauda.

After all, courtesy of an ever inquisitive media and citizen journalists, what harm could there be in the two most senior people at Mercedes enjoying a friendly meal with an old friend who just happens to be manager of a driver desperate for a good seat. 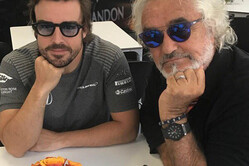 Not just any old driver, mind you, but a two-time world champion who is widely regarded as one of the best on the grid and has just returned from the United States after wowing fans Stateside with his Indy 500 exploits.

Pouring a bit more fuel on the fire, Alonso – for it is he - has been cryptically telling journalists that the Baku weekend has been "very positive" for him, and he's not talking about the 40 grid place penalties and the prospect of being overtaken by the Saubers on Sunday afternoon.

Indeed, pressed on the fact that another member of his management team, Luis Garcia Abad, enjoyed an equally intriguing public meet up with Renault's Cyril Abiteboul, Alonso merely smiled and said: "As I said, it has been very positive for me."

Already under pressure to play down media gossip following Eddie Jordan's claim that Mercedes is seeking to leave the sport at the end of next year, Wolff sought to pour cold water on the speculation.

"If you have dinner with Flavio it's clear that you talk about Alonso," he admitted. "But we are very happy with our current driver line-up. There's no reason to question that. So there wasn't any talking about Fernando joining the team. We talked about Indy."