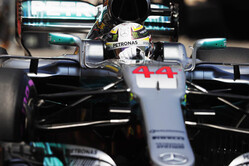 Having had more than its fair share of grip issues this season, Mercedes looks at the interaction between tyres and the track surface.

The bond between driver and race car might be the most prominent in the paddock. But just as important a relationship is that between the cars, their tyres, and the black stuff below - the track surface. And it's an important one too. It's those chunky Pirellis that connect the car to the circuit, and the interaction between tyre and track surface that generates grip.

Barely a Grand Prix media session passes without mention of track surface in relation to car set-up - usually in reference to the eternal quest for the perfect balance. Different track surfaces completely transform the grip generated by a tyre, influencing everything from set-up to strategy. So, naturally, it's crucial for teams to understand how that interaction will develop each weekend.

On a particularly 'smooth' track (as seen in Baku or Mexico City, for example), the surface is less abrasive, tyre wear is expected to be lower and it's generally a lot easier to look after the rubber - aside from under extremes of temperature - meaning that softer compounds are a viable option. This is due to the fact that, when the tyre is compressed into the track surface under load, there is no part of the rubber moulding into the ground.

When tarmac is laid, it contains stones and bitumen. Initially, the bitumen serves as a layer over the stones, making it very smooth. But, as time continues to pass, the surface becomes increasingly worn. This natural evolution of a track surface creates significant variations in tyre behaviours.

Bahrain and Barcelona are both examples of what engineers would term a 'rough' circuit, where the peaks and troughs of the aggregate on the surface can be seen. When a tyre runs over this surface it stresses the rubber, which not only has an effect on grip levels but also increases sliding - which in turn increases the wear rate of the rubber. Circuits which feature high-speed corners, high cornering loads and old tarmac are particularly aggressive on wear - Suzuka being a prime example.

Ultimately, Formula One engineers aren't phased by either type of surface. What matters is that they understand what type of surface they'll be racing on so that they can then set the car up to generate the right kind of grip. Even at two similar circuit configurations, running a car with an identical set-up would yield a completely different balance at each venue if the tarmac were different. And in terms of strategy, the nature of the track has a significant influence on wear and degradation.

The other notable multiplier in the mix is temperature. New tarmac is typically very dark in colour. And because it's so dark, it reaches a very high temperature in direct sunlight. In Baku last year, for example, track temperature peaked at 55°C - approaching the point at which it starts to become extremely difficult to keep the tyres under control. As the surface became too hot, teams began to struggle with a loss of grip, which directly hurt wear and degradation and subsequently influenced strategy calls on the pit wall.

Extremes of temperature don't always affect tyre performance in the same way on different track surfaces, however. In fact, even the fundamental science behind such calculations can't explain every aspect of the relationship between temperatures, tyres and the track surface. It's a constant learning curve for every team in the pit lane - and one which will need to be mastered for a successful weekend in Baku.