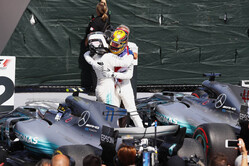 On the back of a relatively poor weekend in Monaco, Mercedes feared much of the same in Canada and Azerbaijan, circuits where the issues that compromised the German team in the Principality would almost certainly arise.

In Monaco, the team suffered from a set-up issue which meant it was unable to generate sufficient heat into all four tyres quickly enough, thereby leading to numerous issues including a lack of balance.

Fearing that similar problems in Canada, where the ultrasofts would lose out in the various slow corners, thereby giving Ferrari the opportunity to further extend its lead, the German team went into overdrive in a bid to solve the problem once and for all.

"After Monaco we pretty quickly understood why the Sunday was like it was, really bad," Toto Wolff told Sky Sports F1. "We needed to come back and understand what happened on Friday and Saturday.

"So a group of engineers came together, in order to calmly assess what happened," he continued. "And any time of the day or night, when you were in the factory, there were lights on and people were working with the simulator. It ran 24/7 for 10 days in a row, and nobody took a day off in that group.

"There are no silver bullets in this sport," he added, "it is about analysing the data and making conclusions. We looked at all areas: it was aero, it was mechanical balance, it was set-up work, it was the tyres themselves, and the way the drivers drove the car."

Asked if Canada therefore represented a breakthrough, the Austrian admitted: "I never feel that. Monaco looked pretty grim but we didn't dive into depression.

"Montreal looks pretty great but I wouldn't say now the problems are solved," he added. "Certainly we have understood it much better, with another set of valuable data points, but now we have to move to Baku."