Hamilton: Ferrari has chosen its number one 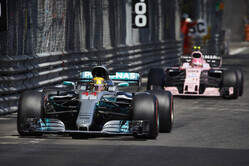 There is a delicious irony in the fact that after weeks of calling on Mercedes to throw all its efforts behind Lewis Hamilton's bid for the title, the (mainly British) media is now aghast at the possibility of Ferrari adopting the self-same policy for Sebastian Vettel.

Though the German insists there were no team orders at play in Monaco, quite contrary to what Raikkonen's post-race demeanour was telling us, Lewis Hamilton believes the Italian team has already made its decision.

"It's clear to me that Ferrari have chosen their number one driver," he told reporters, shortly after finishing seventh, allowing Vettel to stretch his title lead to 25 points and also Mercedes teammate to close to within 29.

"They are pushing everything to make sure Sebastian will maximise on all of his weekends," the Briton continued. "It's very hard for the leading car to get jumped by the second car unless the team decide to favour the other car, so that is very clear."

Despite a disappointing weekend, Hamilton insists that things weren't as bad as some are claiming.

"I really am happy," he said. "Of course ultimately I lost a lot of points today but looking at it as one race, and as a whole today, I came here starting thirteenth. I could have been in a crash, could have damaged the car, blown an engine, come away with no points. I think I managed it nicely and as professionally as I could.

"Of course I can't afford another weekend like this, at the going rate with the Ferraris quick," he admitted "But because you can't afford something doesn't mean it is not going to happen. There is no point dwelling on the fact that you cannot afford it. We have to work collectively as a team more than ever before to beat the Ferraris. Who knows what is going to happen?"

Of course, days after Hamilton claimed he would not be resorting to mind games, this couldn't possibly be a move to cause unrest at Maranello or, by the same token, send a signal to his own team that now is the time to get behind his bid for a fourth title.