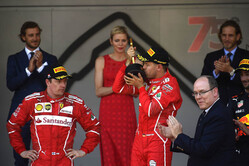 Their faces on the podium told you all you needed to know. While Iceman Kimi Raikkonen is legendary for not letting his emotions get the better of him, there was no disguising the Finn's disappointment indeed, anger, as he stood alongside a beaming Sebastian Vettel and Daniel Ricciardo.

The Finn, who had looked strong all weekend, culminating in an epic lap on Saturday afternoon which gave him his first pole position since 2008, led the opening phase of the 78 lap race.

However, while he was called in first, Sebastian Vettel was left out several laps longer and was subsequently able overcut the Finn and rejoin the race still leading.

Other than feeling he had been called in too early, Raikkonen believes he had been released into traffic further compromising his efforts.

After that the Finn visibly lost his drive allowing Daniel Ricciardo to close up in the process.

Though he took a well-deserved second, post-race the Finn's demeanour made it clear he was none too happy.

"Obviously it's still second place, but it doesn't feel awful good," he told podium MC Nico Rosberg, who made it clear he empathised with the Finn, "but this is how it goes sometimes and we go for the next race and try to do better but it's one of those days that you wish you get a bit more."

Asked if he made the call to pit before Vettel, he said: "No, I was called in and that's about it.

"Obviously it didn't work out very well for me," he continued. "But apart from that, I have no idea. I mean... that's about as much as I can say about it right now. I got the bad end of the story today. I mean it's still second place but obviously it doesn't count a lot in my books at least."

At a time the British media has been baying for Mercedes to throw all its efforts behind Lewis Hamilton, Sebastian Vettel was asked if Ferrari had ordered Raikkonen to yield to him.

"Not really," said the German. "We spoke about the race before. It was clear that, they had the same plan to be honest so the lead car normally gets priority so if I had a choice at that point, sitting behind Kimi, if I was going in the pits first, that's maybe what you like to do because you are sooner on the fresher tyres so I think it's probably one of the rare occasions where the overcut turned out to be positive, so I'm really glad I made that work.

"From the team point of view, there was no plan of any team orders or anything," he continued. "I can understand that obviously Kimi's not happy, I would feel exactly the same, one hundred per cent the same, but as I said myself, I was surprised that the overcut... I don't think Daniel had priority over Max going into the race. I don't know where they are in terms of points and so on so I don't think they look into that but I think the rule of thumb... the rule is pretty clear when you qualify ahead and you are ahead in the first stint, you get priority on the first stop and that's what happened. As it turned out, obviously today it worked in my favour which, as I said, I will take it but we are a team at the end of the day and I can see that Kimi's not happy."

Asked if he understood why his teammate was clearly so unhappy, Vettel said: "Obviously... we were right behind each other. In that case I think it's normal that the lead car gets the priority because you go normally faster on the new set of tyres, and I when I got the lap times from Valtteri, he was doing 16.1, I think, and Daniel was a little bit faster with the old tyres with 16.0. I was, at that point, at 16.4, so I was a little bit slower, so I was assuming Kimi must do something like Valtteri.

"So I just... I knew that the team would call me as soon as we were really tight to Valtteri. We had a little bit of a cushion. I was just going flat-out, trying to go as fast as I can because for me it means that I'm staying ahead of Valtteri, first of all, and close to Kimi.

"I was surprised myself when I came out ahead," he insisted. "So, yeah, I think the warm-up on the supersoft was fine. Arguably you can say it worked for Daniel and for myself today, it worked well to stay out longer but I think if you were looking at it before the race then you couldn't predict.

"We are racing, we get along well, I can understand that Kimi's not entirely happy today. He drove well in the first stint and then obviously you get the message to go in. You do the pitstop and then you push. Obviously it's a bad surprise when somebody comes out ahead.

"For me, I take it, there's no reason to lie, obviously I'm very happy but I can understand obviously that he's upset."