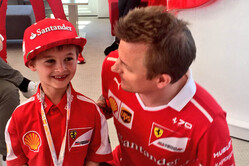 While Sebastian Vettel and Lewis Hamilton played out a cat and mouse tactical battle that kept fans enthralled for much of the afternoon, for one little boy the race ended in the first corner.

Shortly after the incident which saw Valtteri Bottas clip Kimi Raikkonen who subsequently hit Max Verstappen, resulting in the retirement of both the Ferrari driver and his Red Bull rival, the TV cameras picked up on a small boy in the grandstand who was clearly distraught.

The boy, bedecked in a Ferrari shirt and cap, was clearly heartbroken at the demise of his hero so early in the race, and as the 2007 world champion watched forlornly from the side of the track, in the stand the little boys tears flowed.

Later in the race however, the cameras once again picked up on the small boy, his tears now replaced by a wide grin as he met his hero in the Ferrari hospitality unit.

The sight of the lad's tears so moved fans on social media that Ferrari, despite having its hands full as Sebastian battled with Lewis, sought out the little chap and invited him and his parents to meet The Iceman.

As Vettel and Hamilton fought their no holds barred battle on track, in the paddock little Thomas Danel from Amiens was melting hearts.

Posing with Raikkonen, who gave the youngster a pair of his boots and a new Ferrari cap, the 6-year-old later joined the Ferrari crew under the podium as Vettel received his trophy.

On a day of on-track tension, it was a gesture that genuinely gave the sport something to feel good about.