No mind games for Hamilton 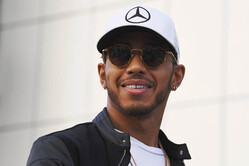 Just two weeks after Sebastian Vettel claimed that he doesn't do mind games, Lewis Hamilton has said he wants to win the title on the track.

"I don't do psychological battles," the German snapped in Barcelona when asked by a British tabloid if he thought he had the edge over Hamilton in terms of mind games.

"Obviously there's some stuff that can be interpreted as psychological battles but I'm not into that at all," added Vettel. "I love driving and that's what I really care about.

"Whether there's some signs or whatever that you pass back and forth. I think he has the upper hand, I'm not clever enough to interpret them, to read them."

Of course, Hamilton has history; during his time alongside Nico Rosberg, although clearly the quicker, more aggressive and hungrier, the Briton sought to destabilise his teammate psychologically, never missing an opportunity to get one over the German.

Asked if he might adopt similar tactics as the title fight with Vettel ramps up, Hamilton dismissed the notion.

"I take a lot of pride in the fact that I am very strong mentally," he told reporters, "and I think that's something you can admire about someone else that you're fighting, like Sebastian.

"He seems solid," he continued, a suggestion that the mind games are already underway. "I want him to be at his best when he gets in the car so I don't have any intention of playing psychological wars outside of the car. I want to beat him in the car because when he's at his best, and I beat him, that says what it needs to say rather than have him on the back foot."

With fortune appearing to drift one way and then the other, Hamilton admits that it looks likely to be long, long summer.

"Just like golf, over 18 holes, whoever is most consistent generally ends up winning," he smiled. "It's an all-round battle, both physically, mentally and technically. That's why it's a great battle."

Asked what he admired most about the German, Hamilton quipped "his car", before adding: "Of course I admire the pace and speed and sheer talent that Sebastian has. That's why I'm enjoying the battle with him.

"But of course his car looks pretty awesome also," he concluded.