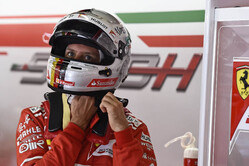 Sebastian Vettel has been forced to make his third engine change of the season following an issue late in this morning's final practice session.

In a move similar to yesterday, when the German had to be rescued by his crew after parking at the end of the pitlane, this time around the issue proved to be more serious.

The telemetry showed an anomaly which later turned out to be a water leak and as a result the decision was taken to change the entire engine rather than attempting to repair the unit. As a result, after just 5 races the German is on his third unit of the season, the 2017 regulations limiting each driver to four.

That said, the unit taken out this morning is repairable and will therefore be put back into Vettel's stock.