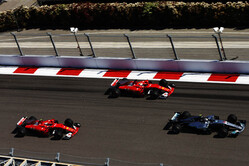 Maurizio Arrivabene: A shame, because today's result could have been better. We didn't get a great start and that penalised us for the rest of the race, on a track where overtaking is difficult. Our race pace was very good, as indeed was our strategy. Once again, both Seb and Kimi proved their worth, driving great races. Now it's already time for us to look ahead to the next Grand Prix in Spain.

Sebastian Vettel: I think my getaway was ok. Maybe I could have been a bit more aggressive. There was a delay in turning the lights off, so that I didn't get a proper reading of how the grid was. Still, I had a good start but we had a strong head wind all day and Bottas could get a massive tow, so there was nothing I could do. Valtteri had a great race. He drove better than the rest of us so he deserved to win. Towards the end I was flat out, I had a feeling that I could get into DRS distance, maybe on the back straight, put some pressure on him and, who knows, lead him into a mistake, but he made none. What happened swith Massa was just a bit of a misunderstanding, I wasn't sure where he was going, but I did not lose the race at that point. Now we look ahead to Spain. We had a good answer about our car in Barcelona during testing days and I don't need to think about the championship. We had a very good start. We are here to win, to do our best, but we can still learn and improve. The speed was there today, but we could have done better. Yet, we have a strong car and a strong team and there is a lot of positive aspects.

Kimi Raikkonen: Overall, it has been a more positive weekend compared to the first three races. I was happier with the car and when I needed to push I could get the lap time out. The race was decided at the start and I had a pretty bad one. I thought I was losing a lot, but I managed to get the position back and stay there. My car was good all the way through the race, but after that, not a lot happened. We tried our best but there was not much to do, I was just holding my position. So, obviously, I'm happy for the podium, but I'm disappointed to lose a place at the start instead of gaining one. Now we need to keep working; small details can make a big difference in the end. I'm very happy for Valtteri who won his first race, I'm sure he will have a bright future.