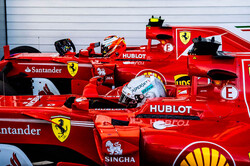 Scuderia Ferrari drivers locked the front row of the grid at the Russian Grand Prix with Sebastian Vettel coming 0.059 seconds ahead ot team-mate Kimi Raikkonen to clinch his second pole position for Scuderia Ferrari, the 209th for the Maranello team and the 47th of his career. The team had worked until late last night to fix a sensor problem to Kimi's car in the garage, so this is a very good result for a real collective effort.

Sebastian Vettel: "I think it's just great. We had had a very good run also yesterday and this morning, and the car was phenomenal. So there's no real secret to today's result, it's just the fact that if you get along with the car you find the rhythm and know what to expect. We knew it would be very tight against the Mercedes, it could have gone the other way, but I am very happy that we locked out the front row for the team. I had a good start to Qualifying , then in Q2 I lost a bit the rhythm. My first run in Q3 was not very tidy, so I left it to the last run. For us it's so important as Mercedes had done an impeccable job in the last few years, so it's great for the team and for me that we managed to break that. But now we'll see what tomorrow brings. It's a long race and we'll try to confirm this result."

Kimi Raikkonen: "Generally, it has been a very straightforward weekend: we have been happier with the car, set-up wise, since the beginning and when you start well it's easier to work and improve here and there. This first row is great for the team, obviously I would rather be in front, but this is not an easy track to get a good lap. I'm happy to take second place , it's a lot better that it has been so far this year. It's good but it's only qualifying, tomorrow is the day where we get points, and we have to do a good job out of it. I expect us to be ok, for sure it's going to be a close fight. Hopefully we can make a good start and see what happens."