Vettel: We still want to improve 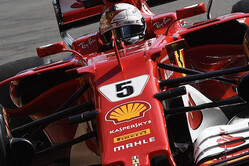 While Lewis Hamilton begins the mind games, Sebastian Vettel lays it on the line admitting Mercedes is still the one to beat.

Despite his assurances that he will not engage in mind games, it is clear that this is exactly one of the ways in which the three-time champion is seeking to undermine title rival Sebastian Vettel in the months ahead.

Speaking ahead of the Monaco Grand Prix weekend, the German was having none of it, preferring to tell it like it is.

"Mercedes is doing a very good job and they are still the ones we have to beat," he said. "We had a good start to the season, but we are not happy to be behind; we want to be ahead of course.

"We could have won more races, but we have a long season ahead of us," he continued. "We have a strong car so that I am not that worried.

"I think we’ve got the points we deserve so far, but other people just did a better job in some races. However, we always try to do our best.

Sometimes it feels easier, at other times harder, but if you can keep it together, then it is possible. I am happy with what we have but we still want to improve."

Looking ahead to this weekend, a race that Ferrari hasn't won since 2001, he said: "We have a very strong package and a very strong team, so we don't have anything to be afraid of.

"If you look at the last couple of years, it's true that Mercedes were very strong around here so they will be the ones to beat, but I am confident that we can have a good weekend."