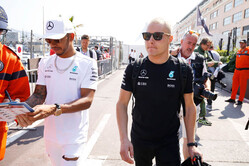 Even at the height of its supremacy, Toto Wolff continued to talk of his fears that Mercedes was under pressure, that its string of titles, poles, fastest laps, wins indeed, 1-2s was about to end.

Now, after an admittedly difficult Monaco weekend which saw his drivers finish fourth and seventh, yielding the Constructors' Championship lead to Ferrari, the Austrian claims the German outfit is the underdog to its Italian rivals.

"They deserved to win, they had the quickest car out there," he told reporters.

"But I like the notion of underdog," he continued, "because the underdog is the one that people want to see win. As a matter of fact, I think we have been that since the beginning of the season.

"We have been dropping in and out of the tyre window," he insisted, referring to a factor that has long been a weak point for the team, now only more so, "never had two drivers or two cars over the whole course of a weekend within that window.

"That inconsistency has been following us through the season, and on the opposite side Ferrari put the car on track in Barcelona and they were quick from the get-go," he added. "So yes, we are the underdog and we need to catch up. This is the new reality at the moment."