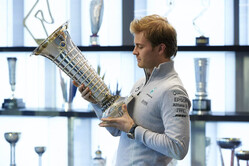 With his underdog claim being somewhat undermined by Lewis Hamilton, it would appear that Toto Wolff is taking another route in his efforts to destabilise rivals Ferrari.

Talking to reporters in Montreal, the Mercedes boss claims he wouldn't be surprised to see Nico Roberg back in F1... with Ferrari.

"I think when he took the decision to retire it was because it was just too much," he said, no doubt referring to the battle within the Mercedes garage rather than on track.

"It was a very stressful year against probably the best driver in F1 and he felt, at that stage, exhausted," continued the Austrian. "That is how he appeared to me.

"I wouldn't be surprised if he changes his mind in a year and reappears in a Ferrari! Or somewhere else."

Other than the fact that Rosberg appears blissfully happy with the one title and the pipe and slippers routine, if Ferrari does seek to replace either of its drivers it will not be with someone who opted to quit in order to stay home with the wife and baby.

If Toto wants to put Ferrari off its game he's going to have to try a whole lot harder than that.