Vettel not thinking of new contract… yet 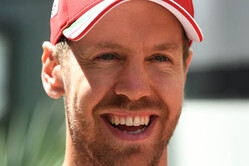 World championship leader Sebastian Vettel is one of several drivers whose contract runs out at the end of the season.

However, while most drivers are already looking to re-sign or seek pastures new, the German, who could be heading towards his fifth title insists thoughts of next year are not on his mind right now.

"It might sound funny, but at the moment we are concentrating on this season and this is not a topic," he told the official F1 website. "So far we did not have the time to address this. The entire team in Maranello is fully concentrated to keep up the momentum that we have at the moment."

While the German might not be thinking about his plans for 2018, there is much speculation over the other seat at Ferrari. Though Kimi Raikkonen has played down his reaction following the Monaco Grand Prix and insists there is no number one at Ferrari, the move which sees the Maranello outfit's third driver, Antonio Giovinazzi, get seven FP1 outings with Sauber, is widely seen as a sign of intent.

Asked about Monaco and whether he benefitted from team orders to the detriment of the Finn, he explains that it was the individual drivers' strategy that worked to his advantage.

"Personally I think there was way too much discussion after the race about this very topic. From a team’s point of view I think it made absolutely sense to do it this way. If I would have had the chance to pit first I would have been happy, as this normally is the best way to win the race.

"As it so happened I was staying out longer mostly because of the team’s point of view to cover Daniel," he continued. "If I would have pitted straight after and the safety car would have come out we would have given Daniel a free pit stop and he would have had the race in his pocket.

"So we had to wait until he pitted and luckily I was very fast during these laps so that I could turn the situation around.

"Normally it does not work like this," he admits, having learned from bitter experience, "and of course I was very happy about the outcome and Kimi was not as he basically has lost the race due to these facts."

It is said that part of Ferrari's, and Vettel's, advantage this season is due to the fact that they approached the Pirelli tyre tests last year more seriously than their rivals.

"I don’t know how seriously Mercedes took that test," admits the German. "For me it was very simple, as I got asked if I wanted to drive and naturally I said yes for various reasons.

"First of all it was very interesting to get a first feeling for the 2017 tyres and how possibly different the car would feel for next season. Also I got told back then that the car would be faster than the previous one. Since I love to drive, the answer to the question of whether I wanted to drive was very easy to answer for me.

"At the test itself the schedule was given by Pirelli, and as far as I remember we were not able to tick all requested boxes, but almost all of them. Whether it helped a lot for this season is hard to answer, as the car was quite different to the one we are racing now. Also, we had some tyre sets that were very much experimental, like it usually is at a tyre test."

Asked about his chances this weekend, and minded of Mercedes claim that the German team is now the underdog, Vettel isn't quite buying it.

"It's not easy to say," he admits. "Should we be at eye level with Mercedes here then this would be great. So far it was very close this year, and in the races we have been fighting for the same tenth of a second.

"Personally I like this track, as there is a certain surprise factor when it comes to the weather predictions. Also the walls are built fairly close to the track, but this should hopefully be already past me, as I do not want to repeat that particular situation again this year."

Asked if Ferrari wins in Montreal it can win anywhere, Vettel claims that he believes Barcelona's Circuit de Catalunya to be the true yardstick.

"You could argue that this track is different so what you do here might matter," he says. "But the real bench mark is Barcelona - and we have been competitive there. We all know the track there so well that we all know almost by heart how to set up the car, so we can fully concentrate on performance - so everyone more or less performs at their optimum. And we had a good weekend there!

"Does that mean anything for the rest of the season? I don’t know. There are still massive updates coming in terms of development along the season, so it will be important to stay where we are."

"Personally I do not see it that way going to work in the morning," he says of the claims that Ferrari is the odds-on favourite, "but yes, we have many reasons to feel good.

"For sure the start into the season was good, but the season itself is still quite long and many things can happen. We as a team are trying to concentrate on each race, and the rest is not really interesting."