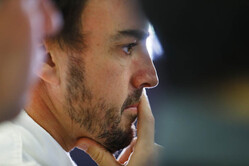 Just a day after McLaren boss Zak Brown set a 90 day deadline by which time the future of the team's relationship with Honda is decided, so too Fernando Alonso has set a limit on the amount of time he will give the pair before admitting "enough is enough".

However, the Spaniard's admission that only a win will keep him at Woking before he makes his decision in September, appears to suggest that a decision, of sorts, has already been made.

Asked what will keep him at McLaren next season, there was no hesitation from the two-time world champion.

"We have to win," he said. "If we are winning, before September, or something like that, I will make a decision and I will stay.

Asked if the lack of a win for a team that has yet to even score a point means he would definitely be leaving, the Spaniard appeared to leave the door just a little ajar. "You never know," he smiled, "you cannot be 100 per cent certain in June about a decision for next year that I don't even start to consider.

"We all want to win," he continued. "Zak's comments yesterday are probably what you expect for Zak to say. He wants to win, he wants to put McLaren again in a contender position for the championship. After three years we are not in that position so things have to change, I guess for the team.

"Like him, I want to win, I joined this project because I want to be world champion, and we are not in that position. If you don't see things changing and you are not in a competitive position maybe you change projects. That is all I can say right now. Until I sit down with myself, in September or October, whenever, I cannot say anything 100 percent."

Asked if his Indy 500 excursion had influenced his thinking, he was insistent: "The third world championship is my biggest priority. I developed my skills to drive F1 cars for the last 16 years. It is the best car I can drive, the F1. If I cannot succeed and win this championship, I can race in any series and I know I can win in any series."