Alonso returns to his "day job" 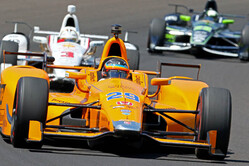 Following his Indy 500 exploits, Fernando Alonso confirms he is ready to return to his F1 "day job".

Whatever the motives behind the world champion's Indy 500 escapade, the fact is that he is the one party that came out of it having increased the value of their brand.

Despite the best smoke and mirror efforts of Honda and McLaren most have seen through it all; the Japanese manufacturer's cause not helped by the fact that it was an engine failure that robbed the Spaniard of possible victory, while Zak Brown's admission that he "expected" such a result further muddied the waters as the Woking outfit effectively turned its back on the biggest (F1) marketing event of the season, Monaco.

Ahead of this weekend's Canadian Grand Prix, Alonso said: It's good to be heading back to Canada... it feels like I've spent a lot of time in North America recently.

"The Indy 500 was an incredible experience and it's been amazing to learn a completely different style of driving, on a different circuit layout and with a very different car," he continued, "but I'm ready to get back to my 'day job' and go racing in F1 again."

While he was away, McLaren suffered another difficult weekend, neither Stoffel Vandoorne nor Jenson Button finishing the Monaco race, with the Briton's frustration compounded by a 15-place grid penalty.

Indeed, even as Alonso returns to F1, there remains a question mark over the much anticipated performance upgrade from Honda, Yusuke Hasegawa admitting that the decision whether to introduce it this weekend or not will be very much eleventh hour.

All of which puts Alonso's comments about Montreal very much in perspective.

"The layout of the Circuit Gilles Villeneuve means it's very power-limited and therefore dependent on straight-line speed and power," he admits. "It's not going to suit our car as much as the twisty, slower corners of Monaco, but I'm excited to get back in the MCL32, catch up with the guys and girls in the team and get back out on track - not only turning left this time!"

While Hasegawa admits the decision as to whether to use the upgraded unit might not be made until Thursday, team boss Eric Boullier is delighted to see Alonso back in the hot seat following his sensational Indy outing.

"We're very much looking forward to having Fernando back in the car again after his Indy 500 adventure," said the Frenchman.

"What he has achieved in just a few short weeks has been phenomenal, and the whole team is looking forward to catching up with him and congratulating him on a hugely impressive performance."

Sadly, talking about Fernando's Indy 500 experience is likely to be the highlight of the team's Montreal weekend.