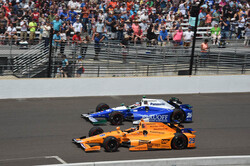 He came, he saw, he so very nearly conquered... sadly however, it was not to be.

However, Fernando Alonso will return to F1 from IndyCar with his head held high, the Spaniard so very nearly pulling off an epic victory.

Unfortunately however, despite leading the race for 27 of its 200 laps and almost constantly running in the top three or four, his eventual retirement had a familiar ring about it, issues with his Honda engine.

"Obviously I'm disappointed not to finish the race because obviously every race you compete, you want to be at the chequered flag," he said. "Today was not possible.

"It was nice to have this competitive feeling, even leading the Indy 500, you know. One lap you put on the lead there, it was already a nice feeling. I was passing, watching the tower, saw the 29 on top of it. I was thinking at that moment if Zak or someone from the team was taking a picture, because I want that picture at home.

"Thanks to IndyCar, amazing experience," he continued. "Thanks to Indianapolis. Thanks to the fans. I felt at home. I'm not American, but I felt really proud to race here." 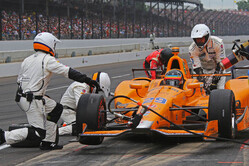 He concluded by congratulating race winner Takuma Sato, the first Japanese to win the iconic event and a name familiar to F1 fans following his exploits with BAR Honda and Super Aguri.

"Takuma was a lot of help, coming from F1. The last two laps I was on my knees really pushing Sato. I’m extremely happy for the final result."

Sato's only previous Indy car victory was in 2013 with AJ Foyt Racing on the streets of Long Beach. He joined Andretti Autosport this season, and his first oval win today is the fifth for Andretti Autosport in the Indianapolis 500 - including three in the last four years.

"It's such a privilege to win here," said Sato, who crashed while battling eventual winner Dario Franchitti for the lead on the final lap of the 2012 Indy 500. "So whether it was the first attempt or eighth attempt or you had a drama in the past, it doesn't really matter. Winning today, it's just superb.

"Yes, I do feel after 2012 I really needed to correct something I left over. Today, I was so happy that I made it and won in a good move."
Sato is the 71st driver to win an Indianapolis 500 in its 101 runnings. The best previous finish by a Japanese driver was fifth by Tora Takagi in 2003. 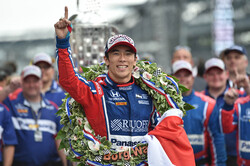 Castroneves overcame a black-flag penalty for jumping a restart and dodged mayhem in two race incidents to finish second at Indy for the third time - making him one of seven drivers with three Indianapolis 500 runner-up finishes. It is the 41st second-place finish of the Brazilian's 20-year Indy car career, which ranks second all time.

Despite going a lap down early with handling issues, Chip Ganassi Racing's Max Chilton, another former F1 driver, led the most laps (50) before finishing fourth. It was the best showing of the 26-year-old's two-year Verizon IndyCar Series career.

A total of 15 drivers led the event, breaking the record of 14 set in 2013. The race was slowed by 11 cautions periods for a total of 50 laps. A red flag stopped action for 19 minutes to repair the barrier and catch fencing in the short chute between Turns 1 and 2. It was the result of a Lap 53 collision between Jay Howard and pole sitter Scott Dixon that vaulted Dixon's car into the safety materials on the inside of the track. Neither driver was injured.

Buddy Lazier was involved in a single-car incident on Lap 122. The 1996 Indy 500 winner spun and contacted the Turn 2 barrier in the No. 44 Lazier Racing-StalkIt-Tivoli Lodge Chevrolet. Complaining of chest discomfort, Lazier was transported to IU Health Methodist Hospital, where he was treated and released.

The final caution flag waved on Lap 184 when the cars of James Davison and Oriol Servia touched in Turn 2, sparking a five-car incident that also collected James Hinchcliffe, Josef Newgarden and Will Power. None of the drivers was injured.

Sato becomes the sixth different winner in as many races this season and jumps to third place in the standings. Castroneves leads with 245 points while reigning series champion Simon Pagenaud, Sato and Dixon each has 234. Alexander Rossi is fifth in points with 190 after finishing seventh today.