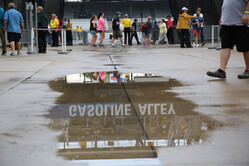 As expected, "Fast Friday" lived up to its name at the Indianapolis Motor Speedway, the day so-called because through to the end of qualifying the turbos are given additional boost equating to about 30 additional horsepower.

The Spaniard will have felt more at home than ever however as the day was compromised not only by the weather, including a lightning storm, but a number of yellow flag periods following incidents.

Spencer Pigot, looking to qualify for his second Indianapolis 500, made hard contact with the Turn 2 barrier in the Juncos Racing Chevrolet, while Zach Veach, rookie driver of the Indy Women in Tech Championship Chevrolet for AJ Foyt Racing, made initial contact with the Turn 1 barrier before coming to a stop in Turn 2.

With a further practice session this morning before qualifying gets underway, the Spaniard sits 15th in the primary car qualifying order.

"Today was obviously a little bit stressful with the rain coming and we tried to fit as many laps as possible," he said. "We managed to fit another two (qualifying simulation) runs late in the day.

"We're quite happy," he continued. "It was another day of learning those extra speeds, and hopefully tomorrow we have a good (qualifying run).

"Tomorrow is about doing a good four laps, hopefully (qualify) in the first nine and wait for Sunday for the real final classification. Tomorrow is another day, but for me, it is another learning day. We'll see what we can do, but there's not much pressure for tomorrow."