Looking into the (tyre performance) window 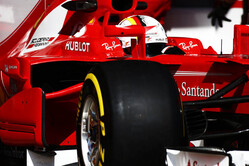 Pirelli sheds light on one of the key factors of the season, how the working range affects tyre performance.

The right working range is absolutely key to performance, and tapping into it means accessing the very best that a tyre can offer: maximum performance, therefore optimal grip and better balance, wear and degradation.

This year, the new generation of wider tyres guarantee considerably enhanced performance if used properly, and this means that getting into the right working range is more important than ever.

That's why, in Monaco where Sebastian Vettel and Ferrari dominated, there was little talk of anything other than the working range of the tyres. The streets of the Principality are characterised by asphalt with a traditionally low level of abrasion, generating little by way of downforce thanks to the low average lap speed. All this together tends to make for slippery conditions.

For Monaco - and only for Monaco - it would be useful to have a compound considerably softer than the ultrasoft: currently the softest compound available in the F1 range, and that's clearly impossible, with the same five compounds (ultrasoft, supersoft, soft, medium and hard) chosen during the winter for all the races.

Ferrari somehow manages to use its tyres better than its rivals. Or to be more specific: it manages to get them within (or at least closer to) the correct working range more often.

This seems to be one of the key technical themes of the 2017 season: Ferrari and Mercedes, which have each won three of the first six grands prix, are delivering one of those enduring technical duels that have always made, and will continue to make, history in F1.

The German team comes off the back of three dominant years; whereas the Italian team has this year come up with a car that is remarkable for its efficiency and versatility. Its ability to get the best out of its tyres, despite the differing demands of each circuit, will be an even more crucial factor than usual when it comes to the business of obtaining results.

But what exactly does 'working range' - or 'optimal usage window' - mean?

Essentially, it comes down to temperature. It's a well-known fact that a tyre offers more grip with more temperature, which enhances its capacity to adhere to the surface. But only up to a certain point: beyond which over-heating can lead to too much degradation, lack of grip, and other problems.

It's a question of not only bringing the tyres up to the ideal working range quickly but also of keeping them there: in other words, making sure that they don't subsequently heat up or cool down too much.

The challenge also consists of making sure both the front and the rear tyres are both working in that ideal range at the same time. This factor in particular seems to have been one of the key factors influencing car performance at the start of the season.

The one important point to bear in mind - and it's a fact worth underlining - is that all the tyres and compounds are identical for everyone. They are assigned to each team by the FIA with a barcode and every team receives and shares the same technical information with Pirelli, even when it's one team rather than another carrying out a particular test.

What makes the difference from that point onwards is set-up: those important technical decisions based on aerodynamics, chassis, weight and dimensions, as well as the characteristics of the suspension and its geometry.

All the things, in summary, that are targeted at one sole objective: optimising the performance and driveability of a car, by - amongst other things - nailing the optimal working window of the tyres.

It sounds straightforward enough, but throughout the history of motorsport, thousands of races have been won or lost just because of this very variable.