Ferrari to test Shield at Silverstone? 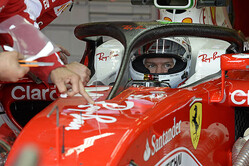 With the FIA seeking to introduce a cockpit safety device for 2018, it appeared the controversial Halo device was all set to get the nod.

However, in an eleventh hour move, the Halo was rejected by the FIA in favour of the Shield.

While the Shield has yet to make a public appearance, first impressions suggest it bears an uncanny resemblance to Red Bull's alternative, the Aeroscreen, which was rejected due to lack of testing data.

Germany’s Auto Motor und Sport claims that Ferrari will get the jump on its rivals next month when the Maranello outfit is the first team to try the Shield which it will run in free practice at Silverstone, with the remaining teams trialling the device at Monza.

Since the Strategy Group decision to throw its weight behind the Shield, a number of teams have expressed concern that the delay in testing the device and accumulating data is compromising work on their 2018 cars.

"We've seen some preliminary models," said Force India's Andy Green. "We've been looking at how we integrate those into the chassis next year.

"There are a lot, a lot of question marks over it," he admitted. "There's a lot of work to do in the timeframe that we have been given. So we need to make some smart decisions going forward. "

"With regard to a deadline, usually we would be the end of July, beginning of August, define the monocoque," said Jorg Zander of Sauber. "The fundamental question here is about the integration of the shield and the attachment, so there is a question about structural integrity, we need those detailed informations of course."

"We are going to very, very tight to get this on to a car for '18," admits Red Bull's Paul Monaghan. "The research into its functionality and protection, it's got to happen almost in parallel with the installation," he continued, "which makes it quite a tricky job, because whatever they change in terms of screen then has an implication to a chassis and if you have cut your patterns then you are in a fairly awkward situations."