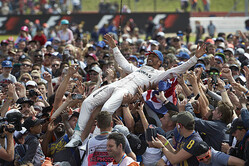 With the British Grand Prix just five weeks away, the British Racing Drivers' Club has just under that time in which time to decide the future of the event.

Having admitted that it can no longer the ever-increasing fees, the BRDC, which owns the legendary circuit, revealed that it has an opt-out clause in its contract which would terminate the agreement after 2019. However, in order to activate the clause notice would have to be given to FOM ahead of this year's race in mid-July.

While, in the wake of buying the sport, F1's new boss Chase Carey said he was eager to retain Silverstone on the calendar, he made it clear that FOM is unlikely and unwilling to reduce the hosting fees, citing that such a move could, apart from everything else, trigger other circuits to make similar moves.

Speaking to the media in Montreal the sport's commercial boss Sean Bratches, when asked about the event, other than the customary PR fluff didn't actually say anything of note. However, he did say there is an agreement in place until 2019, even though the 17-year deal agreed in 2009 should see the event run until 2023.

We have an agreement firmly through 2019," he told reporters. "Our view of the world going forward, as relates to our promoters, is our ability to inject enthusiasm in the sport and activate that in many ways.

"We really want to put the spectacular back into the spectacle," he continued. "And we're going to continue to move in that direction and put our energy into creating value for our promoters and we're looking forward to working with them to that end.

"Silverstone plays an obvious role in the history of this sport and our objective is to create an environment which makes a strong business case for everyone. It's early in the game, we're working closely with them and we're hoping for a long partnership with our friends at Silverstone."

While Bratches claims it is "early in the game" the fact is that the BRDC has five weeks in which to decide the future of the event, and there is absolutely nothing you can read into his comments which suggest Liberty is willing - or able - to assist with the circuit's main issue... it cannot afford the ever-increasing fees.