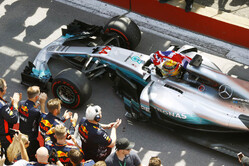 A wide variety of strategies were seen at the Canadian Grand Prix, with Mercedes driver Lewis Hamilton winning with an ultrasoft-supersoft strategy. The second and third place finishers also stopped only once but used the soft during the second stint. Hamilton completed a long first stint on the ultrasoft, which allowed him to make his sole pit stop without losing the lead.

Ferrari adopted a different approach, stopping twice in order to compete the race on the faster ultrasoft and make up positions at the end. In Sebastian Vettel's case, this was influenced by front wing damage at the beginning of the race. All the drivers started on ultrasoft apart from Haas's Kevin Magnussen and Sauber's Pascal Wehrlein.

Mario Isola: "Conditions today were more blustery than they were during the weekend and the race got underway with an early safety car. These factors added more variables to the strategy calculations, and so we saw many teams trying different approaches, while reacting to changing race circumstances. Hamilton's long opening stint on the ultrasoft enabled him to complete the race on the supersoft: the same strategy adopted by Force India, which used it to challenge for the podium. Ferrari reacted to Vettel's early first pit stop by then using a different approach to make up places at the finish."