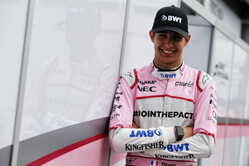 When France last held a round of the Formula One World Championship, in 2008, Esteban Ocon was only 10 years old and contesting the French Cadet Championship, dreaming of the day when he might race in the pinnacle of motorsport in front of his countrymen.

With France returning to the schedule next season, the youngster's dream will finally come true, and he can't wait.

"This is really one of the best bits of news of the year for me," he told a press conference. "I've always dreamt of racing at home, it's a dream that will come true next year."

Though on a multi-year contract with Force India it remains to be seen with which team the youngster will contest his home race next year, the 2014 European F3 and 2015 GP3 champion a protege of Mercedes.

Having made his debut with Manor last season, replacing Rio Haryanto in the second half on the year, this year has seen him take a major step forward, the youngster currently 8th in the standings, his increasingly fractious relationship with teammate Sergio Perez rapidly becoming one the highlights of race weekends.