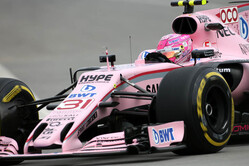 Esteban Ocon: "It's hard to sum up your feelings after such a busy race. I'm happy with our performance and also disappointed not to realise the potential we had today. It's never nice to have an incident with your teammate and it was costly for both of us - we both lost a lot of time and positions. Fortunately I could recover, overtake a lot of cars and score some important points for the team. We will discuss things internally and see what happened, but when you are racing close to each other at a restart these things can happen sometimes. Sergio was very deep into turn one at the restart and I went on his inside. He squeezed me between turns one and two, and I was on the inside going into turn two. He was trying to resist on the outside of the corner and we touched. We need to review it together and understand more. For sure it should not happen again in the future."

Sergio Perez: "It's a shame to retire from a race like this because I think we would have been in a position to win the race. The team did a great job all weekend and deserved much more than to have a race ruined in these circumstances. I couldn't do anything to avoid the accident and it's particularly bad for our team because it ruined the races of both of us on a day in which other teams have scored big points. We will need to discuss the situation within the team and make sure something like this does not happen again. As drivers, we are just part of a much bigger team and we have a responsibility to do our best to bring home a good result, especially considering what would have been possible today. Before the incident, it had been a great race and a strong weekend. My start was very good and I was fighting for second place on merit, but we were really unlucky at the Safety Car restart. Even after the crash, the team did a great job to get the car back together and allow me to resume the race. Even then, the seat broke and the team retired the car on safety grounds. It shows how unlucky this weekend turned out to be."

Robert Fernley: "It was a race of what ifs and what might have been. We had a quick car today and had a good chance of finishing on the podium - perhaps with both cars. Sadly we lost out during a safety car restart, which led to Esteban and Sergio making contact on the exit of turn two. Both cars were damaged and it effectively ended Sergio's afternoon. Esteban was able to stage an excellent recovery drive and was up in third place with just 13 laps to go. In the end the speed of the Ferraris and Mercedes proved too strong and he dropped to sixth, but it was important to pick up useful points. It was a shame to miss out on a podium from a race that saw so much drama, but that's the nature of motor racing. We will discuss what happened internally and come back stronger in Austria in a couple of weeks' time."