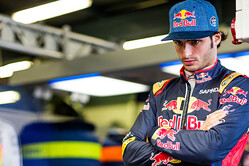 Hard to believe, but the saga over Carlos Sainz' plans for 2018 are currently pushing Sebastian Vettel's Baku antics and the feuding Pink Panthers out of the spotlight.

It all began on Thursday, when the Spanish youngster said he had no intention of spending a fourth season at Toro Rosso. With Max Verstappen and Daniel Ricciardo set to remain at Red Bull there are no other options, consequently speculation over Sainz' plans began in earnest.

However, Christian Horner was quick to slap down the talk, insisting... "I don't know where he thinks he'll be, but he'll be in a Toro Rosso again next year.

"He only got a chance in Formula One because of Red Bull investing in him in the junior years," added the Briton. "It's a little bit disingenuous to be making comments like that. A lot of investment goes into these guys to give them the opportunity."

"No-one has had a fourth consecutive year at Toro Rosso," said Sainz in reaction to Horner's comments, "and I'm ready to take a step.

"I appreciate a lot the people working in Toro Rosso, it's a great group of professionals and the Toro Rosso door is open to me," he added. "It's a nice problem to have.

"My number one target is to be in Red Bull as soon as possible," he insisted. "That has been my dream since I was 15 and they picked me up and that's not going to change."

It was at this point that Red Bull's 'Lord High Executioner', Helmut Marko weighed in, the no-nonsense Austrian suggesting that Sainz is confused.

"I think he's a bit confused," he told Sky Sports News. "I can see it in his driving. He's made some silly mistakes this season already.

"The contract is crystal clear," he continued. "You know in Austria we say 'You don't bite the hands which feeds you'. It was Mr Mateschitz and me who pushed Sainz into Toro Rosso. Nobody else would give him a chance. We sent him a letter saying that we take the option, and as far as I know, and as long as I've been in Red Bull, the driver doesn't decide what they're doing with the contract. It's up to the boss, and he makes the decisions.

"I think he should focus on driving," he added. "The last couple of races, Kvyat always out-qualified him. I didn't speak with him yet, so maybe it's a misunderstanding between Spanish, English and German."

It wasn't all doom and gloom for the youngster however, for Marko says that should a major team, such as Ferrari, make an approach, Red Bull would not stand in his way... though he stressed there has been no such move.

"I told him last year, when Ferrari is coming we can talk," he said. "But I met Gino Rosato last Saturday, and Maurizio Arrivabene, they didn't mention anything about going for Sainz.

"It maybe the father who's dreaming more," he suggested. "The father is here, he talks to anybody who wants to listen. It's always a funny situation."

Asked if he felt Sainz was frustrated, Marko said: "First he should deliver. He should use what he has to the maximum."

It is a view echoed shortly after, when, speaking at the FIA press conference, team boss Franz Tost questioned the youngster's loyalty.

"It's not a decision from Carlos Sainz," said Tost. "He has a Red Bull contract and Red Bull decides what he will do in the future.

"I'm a bit confused about this discussion at this stage of the year," he admitted, "because Red Bull has paid and financed the complete career of Carlos. It paid for his BMW season, Formula Renault then Formula 3, GP3, 3.5 and three years in F1. Why Red Bull should give him away now to any other opponent? Sometimes loyalty should play an important game."

It's fair to say that Red Bull has a reputation for not putting up with any nonsense, and for Sainz to be allowed to make such comments without fear of being fired - as so many have before him - demonstrates the clear faith the team has in his ability.

Yet, at this time of loyalty and binding contracts, one wonders what would happen should Red Bull, as it has threatened so many times before, quit the sport after not having its various demands met.