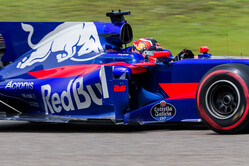 Daniil Kvyat: "I didn't feel completely confident with the car in this morning's FP3, but I gained it back in qualifying as the car felt better. With today's tricky conditions, I'd say a P12 was the best we could do - there was maybe one or two tenths on the table but, in these conditions, you're just a bit more careful as the track is drying and you're not sure exactly where to put your wheels. For tomorrow, if the conditions are the same as today's, it will all be about being in the right place at the right time and hopefully we can move up the grid and into the points."

Carlos Sainz: "How annoying... Unfortunately, we suffered a suspension failure in Q2 which meant I couldn't get back out on track until the very final minutes of the session - I'd like to thank the mechanics for being so fast in getting the car out again! I managed to do a couple of laps, but the system was still not working as it should've, the car was behaving poorly, bouncing around a lot and I had no grip at the rear... So I wasn't able to do any representative laps in Q2 really. It's a shame, because we had a very good Q1 and managed to get into the top ten on the intermediate tyres. With these tricky conditions, it's difficult to say what to expect for tomorrow, but it will for sure be exciting - we have a good opportunity if the weather stays like this, as it opens up strategy options and opportunities and I look forward to a good race!"

James Key (Technical Director): "We had a bit of work to do from yesterday to find a better split between low and high speed performance and balance. Carlos felt reasonably comfortable with his car in FP3 and concentrated initially on the soft tyre to get a little bit of experience on that after missing it in FP2 - he also did a few consecutive laps on a high-fuel load on the soft tyre. Unfortunately, at the end we just missed the window for the super-soft, as the rain came in and there was a short delay in getting his car out, so we didn't set a super-soft time with Carlos in FP3. With Daniil, the setup direction appeared to be okay but it flipped the balance too far in the other direction with the track conditions this morning, so we had to pull back a bit from that and try and find an improved solution. Sadly, he also missed out on a lap with a new set of supersoft tyres in FP3 as the rain came just as he was starting to set a time. FP3 lap times therefore didn't look too good, but in reality we were reasonably pleased with progress. Qualifying was pretty intense at the start with uncertain track conditions, being in a bit of no man's land between slick and intermediate. However, the drivers were fine with the car in wet conditions and the team did well to time the runs correctly. Unfortunately, at the end of Q1, Carlos had quite a major rear suspension issue. It was fixable, but it meant that we had to rush it through and, although we got him out at the end of Q2, the car was far from its optimum condition given the nature of the problems. Carlos did his best to run the car like that, but it was missing quite a bit of performance. I have to say the mechanics did a fantastic job to get the car out at all in Q2 given the amount of work they had to cover quickly. For Daniil, he was doing well in the initial runs of Q2, running dry tyres as the track conditions improved. Unfortunately, just at the end, we just missed Q3 by a couple of tenths. Looking back, had we gone out for a single timed lap slightly later in the session, we would've given ourselves a better chance of making it through but, with very few reference points and no real references from FP3, it was a little difficult to judge. In the end, we finished just outside the top ten but, given the number of problems we've had to solve, mid-grid is where we've ended up. Now we've got to seek a better performance tomorrow to put ourselves in the top ten as best we can."