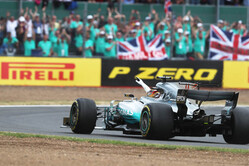 In the wake of the tyre failures that affected Kimi Raikkonen and Sebastian Vettel on successive laps at the end of the British Grand Prix, not to mention a late stop to change tyres for Max Verstappen also - though Red Bull subsequently admitted this was a precautionary measure - heading towards his fourth successive Silverstone win, Lewis Hamilton opted not to take any unnecessary risks.

"The team said generally it wouldn't be a problem," the Briton told reporters when asked if he was cautious in the close moments of the race, "but blistering did appear.

"Then I heard about the blow-ups and I backed off," he admitted. "I went basically to half or sixty percent throttle everywhere, so I was really slow the last two laps. I was basically three or four seconds off the pace.

"I just wanted to bring it home," he said. "I had a 19s gap so fortunately I could have gone slower, but I didn't feel I needed to."

Ahead of a full investigation, according to Pirelli, initial checks have revealed that the two left-front failures the Ferrari duo suffered were unrelated.