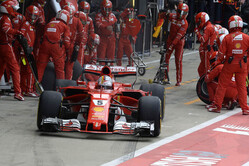 Though both Ferraris suffered punctures to the same left-front tyre within a lap of one another, ahead of a full investigation, Pirelli suggests the two were unrelated.

"We are obviously investigating the tyres as usual," said Mario Isola, "but more deeply because of what happened.

"We believe, although it has to be proven, that the mode of failure of the two tyres is different, so we need to investigate," he added.

"What we can exclude is that we had any carcass failure on Kimi's tyre because the tyre was still inflated. There is a part of the tyre that is damaged and we will investigate deeply on all the tyres, not just this tyre.

"Sebastian had a different issue with a loss of air," he revealed, "so we have to understand and we will provide a report.

"We are working together with the teams, because the data from the teams is an important part of the investigation and it's in the interest of everybody to better understand what happened."

Amidst media speculation that Ferrari was at fault for leaving its drivers out on the softs for too long, Isola said the finger should not be pointed at the Italian team.

"We are investigating 360 degrees," he said, "I am not excluding anything, and to be sure that we come to the correct conclusion we need to be with an open mind and consider everything.

"It is too easy to say it is wear and close the investigation, but this is not professional from our side. We need to be sure that we find the right explanation, maybe it's a puncture."