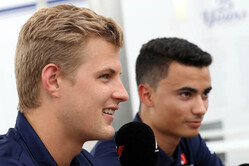 Sauber has tonight issued two official statements in the wake of media reports over the course of the day concerning team principal Monisha Kaltenborn's departure from the team.

Strangely however, while the second statement - issued at 23:54 (Hinwil time) confirms the reports, a statement issued thirty minutes earlier takes issue with claims about the team's drivers.

"The owners and board of Sauber Motorsport AG take strong exception to speculative and widespread media reports today that our race drivers have not been, and are not being, treated equally.

"This is not only patently untrue, it would be contrary to the team's absolute and longstanding commitment to fair competition.

"These reports, attributed to anonymous "sources", are highly detrimental to both Marcus Ericsson and Pascal Wehrlein as well as to the management and all staff of the Sauber F1 Team."

"Longbow Finance SA regrets to announce that, by mutual consent and due to diverging views of the future of the company, Monisha Kaltenborn will leave her positions with the Sauber Group effective immediately.

"We thank her for many years of strong leadership, great passion for the Sauber F1 Team and wish her the very best for the future. Her successor will be announced shortly; in the meantime we wish the team the best of luck in Azerbaijan."

One cannot help but feel that the team would have been better served reacting earlier and issuing the statements in reverse order.

Indeed, in terms of the team's obvious anger at talk of unequal treatment of its drivers, it should not be forgotten that in Melbourne 2015 the Swiss outfit attempted to shoehorn three drivers - Ericsson, Felipe Nasr and Giedo Van der Garde - into two seats, a move that was to eventually cost around $16m in terms of compensation to the Dutch racer.