Boullier: Huge pressure on Honda to get it right 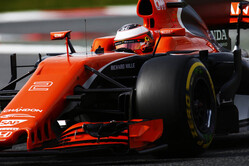 Though the morning appeared to get off to a decent enough start, Stoffel Vandoorne at times running as high as third on the timesheets, one couldn't help but wonder if it would last.

At the end of last week's 'difficult' opening test, Honda boss Yusuke Hasegawa, not only admitted his surprise at the problems that permeated the four days - necessitating up to five engine changes - he also expressed concern that the start to McLaren's season would be compromised.

And as we awaited news from Japan, where investigations into last week's failures continue, not for the first time Honda confirmed that an 'issue' meant yet another change of engine.

Unsurprisingly, McLaren team boss Eric Boullier became the media's centre of attention, as journos, like race fans, wondered for how much longer will this continue.

Asked about the pressure being exerted on Honda to get it right, the Frenchman insisted: "Maximum!"

"Obviously we are in Formula One, we are racing and we have to perform," he continued, "so the pressure is obviously huge.

"We put the maximum pressure on all of our relationships with Honda and it's the same from them. We can't put a foot wrong, we need to be able to deliver the best car as well, so this is on both sides."

The lack of running last week meant that only Toro Rosso completed less test mileage, while today Vandoorne, who finally completed 80 laps could only look on in envy as Felipe Massa and Sebastian Vettel both reeled off over double that amount.

"So there are a lot of consequences to running fifteen or eighteen km/h slower in a straight line.

"But we can make most of the data just by running the car," he continued, "and obviously that is what we want to see. This is to make sure we get correlation with the simulation back in Woking, to know it's good, because that allows us to keep the same process and the same way to design and develop the car and make predictions for the future.

"Would be easier, yes, if we had the same speed as the others because then you would have a better understanding of some different factors."

Asked if the continuing failures could end in divorce, he insisted: "No! We have a contract in place. Normally it's seven years in every marriage or relationship, not three! So, no, we don't even think about it. There is a solid contract between us, a long-term contract and obviously we want to build on it even if it's not ideal yet."