Massa quickest as teams turn up the wick 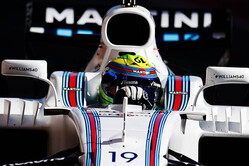 While the opening test was more about reliability and acquiring data, with an eye on Melbourne, which is now just over two weeks away, the focus this week switches to performance.

The ten drivers on duty this morning completed 490 laps in total, and for the most part there were no issues.

That said, following what Renault will only describe as a 'sensor issue' the engine in Jolyon Palmer's car has been changed. As a result the Briton has only completed 15 laps and failed to post a representative time.

With the French team now running the same strategy as Mercedes – in terms of running its drivers for half a day at a time - it will be an hour or so into this afternoon's session before the R.S.17 is ready for Nico Hulkenberg.

No such issues for Felipe Massa who was the first driver to break the 1:19s barrier today, the Brazilian, on supersofts, posting a best time just 0.21s shy of Valtteri Bottas' best from last week.

Daniel Ricciardo was second quickest in the Red Bull. Having been 'up there' for most of the morning, when the Australian made the switch to supersofts he failed to improve, evoking memories of last week when Bottas also failed to find more pace in the red-banded rubber.

In the final moments of the session the Australian switched to ultrasofts and though he improved the difference was minimal and not enough to surpass Massa.

Lewis Hamilton had a low key morning, the Briton completing a couple of long runs on his way to posting a best time of 20.456.

It was noticeable, particularly on his second run, that on the softs his pace fell away quite dramatically.

As was the case on the first day of last week's test, Sebastian Vettel appeared reluctant to give up his medium tyres - at one stage even running with a set of unmarked prototype mediums.

Nonetheless, his pace was strong - his best time just 1.4s off the pace - as was reliability, the German completing 82 laps.

If this morning's activity was anything to go by, we could be in for some fun and games with Force India and Haas this year, Esteban Ocon and Kevin Magnussen leapfrogging one anther all morning like a pair of cheeky meerkats.

After last week's issues, Daniil Kvyat will be delighted to have had a relatively trouble-free morning, the Russian completing 45 laps.

What appeared to be an altogether better morning also for McLaren, saw Stoffel Vandoorne completing 34 laps on his way to posting a best time of 22.698. However, a late morning electrics issue means that the second week of testing begins much like the first, with Honda opting for a change of engine.

Although first out on track at 09:00, it was some time before we witnessed a time from Pascal Wehrlein, raising fears that his back pain had returned. However the German carried on and by the lunch break had completed 47 laps.