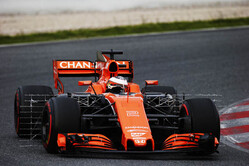 The line-ups for the all-important second Barcelona test, which gets underway on Tuesday, have been confirmed.

Once again, Mercedes is alternating Lewis Hamilton and Valtteri Bottas, one driving in the morning and the other in the afternoon.

While Mercedes adopted the policy in 2016 in a bid not to overwork its drivers, Renault has chosen to adopt the same policy, Jolyon Palmer and Nico Hulkenberg alternating over the four days.

Lance Stroll gets the first two days in the Williams, leaving Felipe Massa hoping that there are none of the 'issues' of last week which resulted in the Brazilian only getting 103 laps.

After a difficult opening test, Toro Rosso and Force India will be seeking improvements, while McLaren is likely to be the focus of media attention.

After last week's opening test, this week the teams will be ramping up their efforts for Melbourne, first looking at race distances and by the end of the week at outright pace.

Valtteri Bottas topped both the timesheets and the mileage stats, and no doubt teammate Lewis Hamilton will be wanting to exert his standing over the coming days.

While the true order of things won't be known until qualifying in Melbourne, this week should certainly give a much better idea.