Hamilton feels for fans as early conclusion to title looms 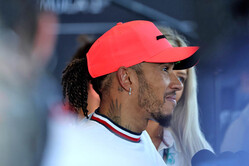 With Max Verstappen poised to secure the title either this weekend, or, more likely, next weekend in Japan, Lewis Hamilton has expressed his sympathy for the fans.

"Definitely I feel for the fans," he told reporters, ahead of what could be the weekend that decides the 2022 Drivers' Championship. "For us last year going right down to the wire, that was intense for everybody and so it's never great when a season finishes early, even when I've experienced having it finish early in places like Mexico.

"For you as the one individual, it's great," he admitted. "But for the actual sport it's not spectacular... so I'm really grateful to have had 2008, right down to the last 17 seconds, and obviously last year pretty much the same. Let's hope for the future that it's a bit better."

He repeated the feat in Mexico a year later, again with two races remaining, as there were when he secured the 2019 championship in Austin, while in 2020 there were four races still to go when he wrapped up the title in Istanbul.

While 2002 saw Michael Schumacher secure the title with six races remaining, there were only 17 races in total, and just 16 when Nigel Mansell claimed the 1992 crown with 5 rounds remaining.

Of course, it won't only be the fans that are left disappointed by an early conclusion to the championship, but you can be certain that Liberty and the guys at the F1 Group are working flat-out to ensure it doesn't happen again.

Check out our Thursday gallery from Singapore here.