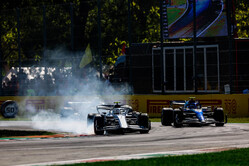 Pierre Gasly: "Looking at the result, finishing behind the top three teams is the best we could have done, and I am very happy to be collecting points again. It was a slightly frustrating race, I think I'll have nightmares about Ricciardo's rear wing for the next few nights, we tried a few different things to try and pass him and our overall performance was competitive, but we just didn't have the pace to get past the Mclarens today. We'll now prepare for Singapore, we know what we need to work on, how to improve, and we'll aim to continue finishing in the points."

Yuki Tsunoda: "Starting last on the grid was always going to be difficult today, but I think the start of the race was good for me and I was able to make some overtakes. I struggled with the pace on the Hards, so we need to go away and look at our long-run pace and try and improve this for the upcoming races."

Jody Egginton (Technical Director): "It's good to come away with points today, with Pierre driving a solid race. At the same time, it's frustrating that with Yuki we could not turn the strong performance he has shown here into a representative grid position and a better fight for points, due to penalties. Regarding Pierre's race, the fight with the McLarens was good, but with two against one and Ricciardo proving tricky to pass, the McLaren strategy created some breathing space for Norris, which we could not recover, meaning we came home in P8 with Pierre. In summary, it's good to be scoring points again, but we need to be getting both cars up there in order to improve our Constructors' position, so obviously this is one of the key areas to be focused on."

Franz Tost (Team Principal): "The fans, and the celebrations for the 100th anniversary of this historic track, didn't deserve the race to finish the way it did today, as it would've been fantastic to see a fight on the last few laps, but unfortunately, as Ricciardo stopped so late, in accordance with the regulations we had to finish the race behind the Safety Car. As for us, our race was reasonably good. Pierre started from fifth position and finished eighth, he struggled a little bit with understeer on the Hards, but generally speaking - and also considering the performance of the cars in front of us - this was the best possible finishing position we could achieve today. Yuki started from the back of the grid, therefore it was not so easy to overtake cars, nevertheless he managed to do this well. We called him in during the Safety Car for the Softs, as we thought he would have a good chance with the new tyres, if the race was restarted, but unfortunately this was not the case. He could only finish in P14, but in general, Yuki had a good race weekend. Overall, we scored four points here, which is positive as we have closed the gap to Haas in the Championship, so we now need to keep this momentum, from Singapore in a few weeks, until the end of the season."