Ocon and Magnussen join growing list of drivers to be penalised 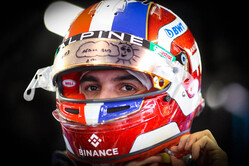 Esteban Ocon and Kevin Magnussen have received grid penalties after taking on new engine components, bringing the number of drivers affected up to nine.

He will be joined at the back of the grid by Lewis Hamilton and Yuki Tsunoda, the Japanese driver appearing to have hit the jackpot in terms of penalties.

Already hit with a 10-place drop after receiving his fifth reprimand of the season, the Japanese took on another ICE, turbocharger, MGU-H and MGU-K, thereby incurring further grid drops.

Then, in FP2 he was adjudged to have failed to slow under the yellow flags at Turn 5 and hit with another 3-place grid drop.

As it stands, Verstappen and Ocon look set to drop 5 places, while Perez drops 10.

Bottas, Schumacher and Magnussen drop 15, while Sainz, Hamilton and Tsunoda start from the back.

However, while it is entirely possible that there will be further component changes before Sunday's race, there is also every likelihood of drivers being punished for silliness, such as impeding, during this afternoon's qualifying session.