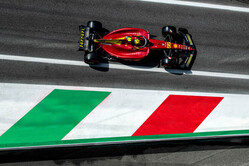 The Scuderia Ferrari drivers were fastest in both free practice sessions for the Italian Grand Prix at the Autodromo Nazionale di Monza. The mood in the paddock was somewhat subdued following the news that Queen Elizabeth II had died on Thursday. Ten minutes before the start of the first session, all team personnel lined up in the pit lane to observe a minute's silence in memory of the British monarch. All teams also paid tribute with special stickers on their cars.

In the first session, Charles Leclerc and Carlos Sainz worked on different programmes. They both worked on set-up but given that Carlos will have a grid penalty for a change of power unit, he tackled various comparative and evaluation tests. Charles was quickest in 1'22"410 on Soft tyres, with his team-mate next up with a 1'22"487. The Monegasque did 25 laps and the Spaniard 23.

In this session, the drivers' programmes were more similar, both starting off on Medium tyres although their best times were again set on the Softs. Sainz was quickest with a 1'21"664 and Charles did a 1'21"857. They then worked on race preparation running a heavier fuel load to check the effect on the tyres. Sainz did 24 laps, one more than his team-mate.

This evening the team will be working on the details of tomorrow's qualifying which looks like being as close as usual. It will be a bit different to usual however, as several drivers have got grid penalties and this could affect how they tackle the session. Those with penalties might give their team-mates a tow which could make a decisive difference. Qualifying takes place at 16 CEST, preceded by the final free practice at 13.

Carlos Sainz: Overall it has been a positive day. We still need to check all the data, but I felt quite comfortable in the car and the package this weekend seems to be working well.

There is still work to do to try and improve the pace on the long runs, so we'll look into every detail tonight and try to improve for tomorrow but especially for the race.

Charles Leclerc: The feeling in the car was good. We still haven't found the sweet spot in terms of balance, but we tried many different things throughout the day and know which direction we want to go in.

Our race pace looked stronger than our qualifying pace, so if we put it all together there is quite good potential to have a solid weekend.

Check out our Friday gallery from Monza here.