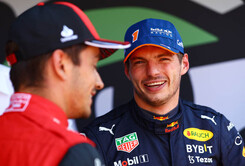 Q: Max Verstappen, for the second time in a row, pole position. That must be feeling great on your own soil.
Max Verstappen: Unbelievable, especially after yesterday as well. We had a difficult day but I think we worked really well overnight with the whole team to turn it around and today we had a quick race car again, but it was very close and a lap around here, a qualifying lap, is insane.

Q: Did you make a lot of changes from yesterday to today?
MV: We changed a lot because yesterday it was a bit rushed in FP2 to get the car together but yeah, today it was again enjoyable to drive.

Q: Charles, that was close!
Charles Leclerc: Yeah, very, very close. I mean, Max did a great lap in the end. Our car was getting better and better through qualifying. At the beginning I was pretty scared, because Max was much, much quicker than us on used tyres. But then in Q3, the car came a bit more together and I managed to do that lap, which was close enough for P2. But tomorrow is the race and we'll give it all.

Q: I mean the car is working much better this weekend than last weekend, obviously. There's much more downforce needed here. What do you think you can do tomorrow?
CL: Yeah, I mean we are much stronger here compared to last weekend so that's good to see. And for tomorrow, I think our race pace looks quite strong. It's going to be close with the Red But but we just need to do a great start and then we'll see.

Q: Carlos, were you happy with that lap?
Carlos Sainz: Yeah, it was a clean lap with no mistakes, just missing that last half a tenth to a tenth to beat Charles and Max. It was on the limit out there, every little metre of track that you could use and that you could push was counting. It wasn't an easy quali from Q1 to Q2 to Q3, but I think in the end we did a decent job.

Q: How is this track physically? Because you don't have a lot of straight line to recover yourself. Is it hard?
CS: It is very tough out there, especially with these heavier cars. The track is especially demanding on the tyres. We have a lot of overheating during the lap, even in the long runs, a lot of degradation. I think tomorrow is going to be an interesting day. There's going to be a lot going on even if it's a difficult track to overtake. There's going to be still many options with the strategies.

Q: Max, pole for the second year in a row here at Zandvoort. You heard the roar from the crowd as you crossed the line, just how special is this for you?
MV: Yeah, it was a special qualifying, especially after yesterday, you know, it was really tough, and we had to change the car around quite a bit, because we didn't really have any information. So, basically, this morning was still about learning quite a bit of the car and all about just trying to fine tune it a bit towards qualifying. And yeah, we were quick in qualifying, but it never really showed, because sometimes I went a bit early then didn't go for another run. Q2 was on a scrubbed tyre only, so yeah, really happy of course with Q3, it was really fine margins. And also the last run was a bit compromised with the out lap because of just getting one extra car in front of me and then I had to slow down a bit too much in the first sector. So when I started my lap, I felt like the tyres were not really switched on, but I managed to recover a bit in Sector 2 and that was just enough for pole.

Q: And it was Sector 2 on that second lap that got you the pole?
MV: Yeah, I knew that I was losing a bit of time there. So yeah, just full risk of course in Q3.

Q: Max, what does it say about you and your racing car that you can take pole on two such different race tracks as Spa last weekend and Zandvoort this weekend?
MV: Yeah, that I think we have a complete car. I mean, you can see how quickly it changes though because in Spa we were dominant. Here, it looked a bit tricky initially and now it was very close in qualifying. So, you can clearly see on the higher downforce tracks that we seem to, let's say, struggle a little bit more to extract the best out of the car. But it's still a quick car and also after last night you see that the whole factory and also here at the track we made the right choices with the car on how to make it faster.

Q: You're going to be starting the race in the best possible place on the grid but how close is it going to be with these guys in red tomorrow?
MV: I think it will be close, but basically for most of the races this year it has been like that, so I'm looking forward to it and I hope that we can have a good race.

Q: Alright, very well done to you, thank you. Charles, coming to you now. Fastest in two of the three sectors in Q3. Are you frustrated not to be on pole?
CL: Well, frustrated? Obviously you always targeting to be on pole, and in looking at my lap, in Turn 10 I did a mistake but yeah, apart from that, to be honest, looking at the gap with Max today, I did not expect that coming into Q3, after the Q1 and Q2 that we had, which was much more much more tricky... But at the end of Q3 the car felt quite good, I could push. I haven't been completely at ease with the balance of the car since a few races on the quali runs. But today felt a bit of a step better, so it's good and now I'm looking forward to tomorrow.

Q: Why did the balance come together in Q3? Did you change anything on the car or did the track come towards you a little bit?
CL: I don't really have the explanation yet. We tried different things on the out-laps and at the end it was a little bit better. A bit of a stronger front, which I struggled with understeer since a bit now. So, we need to work on that but for the race instead I felt confident in the last few races. So, I'm a bit more confident for tomorrow.

Q: So, I was going to say, you're confident over your long runs. Do you think you can challenge Max, even if you don't get to Turn 1 first tomorrow?
CL: Let's see. I mean it's a track where it's very difficult to overtake. I hope that we will be as close as we were today, and hopefully we can play a little bit with Carlos and I to put Max under pressure.

Q: Carlos, coming to you. We saw a big improvement on that second run of Q3. It seems your car improved during the session just like Charles.
CS: Yeah, very similar to Charles actually, after Q1 and Q2. It looked like we were quite a big chunk behind Max and the Red Bull. They looked like they clearly had the upper hand - but then I was surprised at how much grip we gaining in Q3. Probably that first banker lap in Q3 wasn't very strong, or should have been a bit stronger to give me better references for the last attempt in Q3, which I was maybe chasing a bit too much. And yeah, I improved a lot. I improved, I think, three-tenths but I'm pretty sure that a better banker lap would have could have given me a bit of a better run for pole at the end.

Q: Right, so what about the long run pace of the car and the battle with Max Verstappen tomorrow?
CS: I mean in Quali we've been within a tenth of each-other, so in the race, if it's like that for 70 laps, it's going to be a tight a race. Normally, the Red Bull tends to... lately on Sundays, together with a Mercedes, they seem to have something there that we haven't had recently, but if we go back to France and Austria, we had something on Sunday, no? So yeah, hopefully, it is more like those two races and we can challenge Max during the whole race.

Q: Do you expect the increase in the length of the DRS to make overtaking easier tomorrow?
CS: A little bit easier. I think there's a combination that these cars should be a bit better to follow, compared to last year, plus a couple hundred metres extra DRS, for sure it's going to be easier than last year. It's still not going to be easy, because it's still a very difficult track to overtake. But it's not going to be as tough as it was last year, hopefully.

Q: (Ronald Vording - Motorsport.com) It's a question to Max, just on the extreme turnaround. Just how big were the changes you made, compared to the set-up you started with yesterday. And secondly, did you find the solution yesterday evening straight away? Or was it still about making changes even during FP3 this morning?
MV: Two things. I think, because we had to rush the car in FP2, some things were not as we expected them to be in terms of set-up, so that didn't help. So that's why FP2 was also not really representative at the end. And then a few things to fine-tune as well. In the evening, overnight, but yeah, most of the changes were made in the evening.

Q: (Alex Kalinauckas - Autosport) Charles, you mentioned a mistake in Turn 10 Could you just talk us through that please - and do you think that cost you pole today? Thanks.
CL: Well, I mean, I'm sure nobody did the perfect lap, especially in these conditions. Turn 9 and 10 are two extremely tricky corners with the tailwind there, and they are much more affected than anywhere else on track. So it was very, very tricky and with the balance of my car, I struggled quite a little bit in Turn 10 and, yeah, and I lost the rear and I lost like a tenth or something. So, yeah, looking at it, if you do the perfect lap then you can get pole but on the other hand, I'm sure Max and Carlos didn't do the perfect lap either. So, the end result is that we are P2 today.

Check out our Saturday gallery from Zandvoort here.