Verstappen edges out Leclerc by 0.347s in FP3 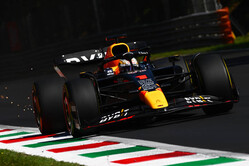 The big news this morning is that Alex Albon is out of action for the remainder of the weekend after suffering appendicitis, and will be replaced by Nyck de Vries, who makes his F1 (race) debut.

Consequently it's a case of in at the deep end for the youngster, in a car that took Albon to tenth yesterday.

In fact the Dutchman was in action in FP1 yesterday, albeit at the wheel of the Aston Martin.

Carlos Sainz set the pace yesterday afternoon but is one of several drivers who will take a grid penalty on Sunday. Nonetheless, the pace of the Ferrari looks strong.

Red Bull, on the other hand, appears to be concentrating on race set-up and has therefore yet to show its hand.

Ferrari and Mercedes were both playing down their chances ahead of the weekend, and while the Scuderia might have been overly pessimistic, the Silver Arrows do appear to be struggling.

McLaren and Alpine look set to continue their fight for best of the rest, while Alfa Romeo looks to have taken a step forward.

As it stands, there are six drivers facing grid penalties, including Hamilton, Verstappen, Sainz and Perez, but there could be more.

Poor old Yuki Tsunoda has hit the jackpot in terms of penalties for having been demoted 10-places after receiving his fifth reprimand of the season, the Japanese took on new engine components. Then he was handed a further 3-place drop after failing to slow under the yellow flags in FP2.

Ahead of the green light, Haas reports that an issue was discovered during the fire-up of Schumacher's car. The team is hoping to get him out before the end of the session.

Bottas is first out, followed by Stroll, Tsunoda and Vettel. The Finn is on softs, the rest on hards.

Alpine reveals that Ocon has taken on a new ICE and therefore incurs a 5-place grid penalty.

Bottas subsequently improves to a far more sensible 24.244, while Perez raises the bar with a 22.611.

Having gone quickest in S1, Verstappen (medium) eventually eases off in S3 and crosses the line at 30.896.

Verstappen is none too happy after encountering a slow Russell on the racing line.

The Ferrari pair head out, the crowd cheers them on.

Verstappen goes quickest with a 21.872, marginally off his best time yesterday.

Norris goes fifth (23.770), ahead of Bottas, Russell and Hamilton, but is demoted when Sainz improves to fourth and Alonso goes fifth.

The leading five - Verstappen, Perez, Leclerc, Sainz and Alonso - are all on mediums.

An incident involving Bottas and Sainz at Turn 1 has been noted - the Spaniard looking to have impeded the Alfa Romeo driver who had to take avoiding action.

Almost 25 minutes in and de Vries has yet to appear, his team clearly still setting the car up for him.

Gasly goes eighth, ahead of Ricciardo, Bottas, Stroll and Russell.

Hamilton improves to seventh with a 23.340, the seven-time champ still on the mediums.

De Vries goes eighteenth with a 25.367. He subsequently runs wide and through the gravel at Turn 7, bringing out the yellows.

"Traffic paradise," reports Bottas as there are 16 drivers on track... then, all of a sudden, there are just two, Tsunoda and de Vries.

With 19 minutes remaining, Russell and Sainz lead the way as the qualifying sims get underway, fresh softs the order of the day.

Starting from the back tomorrow, Hamilton has promised to give his teammate a tow in qualifying, a practice that may be followed at several other teams where drivers are facing penalties.

As ever a queue forms on the back straight... ridiculous.

Indeed, that's what Alonso clearly thinks, for he passes the building traffic jam and sets about starting his first qualifying sim lap.

Russell improves to fourth, but he is demoted when Alonso posts a 22.306.

Quickest in the first sector, Latifi goes eighth overall (22.786), the Canadian having a point to prove in terms of de Vries.

"Still no rear end on the entry to the corners," reports Russell.

Verstappen begins his first flying lap on the softs, as teammate Perez posts a 22.148 to go fourth.

Leclerc improves to 21.599, but is still 0.347s off the pace. Of course, with Verstappen having incurred a grid penalty, the Monegasque won't be too worried about that.

"We need to work on Turn 6 especially," warns Leclerc, "the car is not turning at all."

Magnussen improves to 19th, which demotes Stroll to last.