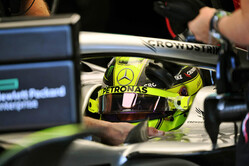 Lewis Hamilton will take a grid penalty at Monza this weekend as Mercedes replaces the power unit damaged in the first lap clash with Fernando Alonso at Spa.

The clash saw Hamilton's car lifted into the air and crash back down, the impact measured at 45G.

As it stands, Mercedes hasn't said how many components are being replaced therefore it isn't clear exactly how big a penalty the seven-time world champion faces but some media outlets are already reporting that he will start from the back of the grid on Sunday.

Max Verstappen, Charles Leclerc and a number of others took engine penalties at Spa, which, like Monza does at least offer the opportunity for overtaking.

Valtteri Bottas is also likely to take on a new internal combustion engine, which would be the Finn's sixth of the year, while Sergio Perez may also seek to add a new engine to his pool.

With Singapore and Suzuka next up, neither of which is particularly conducive to overtaking, several more teams may yet elect to use this weekend in order to add new units.

Check out our Thursday gallery from Monza here.