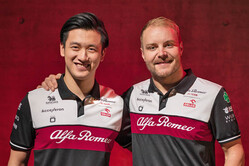 Alfa Romeo F1 Team ORLEN heads to its home race, the Italian Grand Prix, as it prepares for the embrace of the passionate Tifosi at the Autodromo Nazionale di Monza.

There is something unique about Monza. It's not the octane-laden atmosphere, no matter how fantastic, or the sight of tens of thousands of fans creating a flowing sea of colour (admittedly, mostly red) on grandstands and grass alike; it's not the track, no matter how many thrilling, joyous or tragic pages of the history of our sport have been written on its kilometres of tarmac; it's not the slightly melancholic feeling of the final European race of the season, of leaving behind your hospitality - home away from home - until the cold mornings of pre-season testing in Barcelona.

No, there's something unique about Monza, and that's the nature of this circuit itself. It's what this track embodies - in the history of motorsport, in the collective imagination of everyone connected with racing, in the very centre of the Italian psyche. Monza is racing: it is racing at its purest, it is human and machine versus the laws of physics. It is banking so steep it's dizzying; corners that have no numbers but names; crumbling tarmac on forgotten parts of the track where you can hear echoes of Farina, Fangio, Rindt, Clark, Senna and Schumacher, heroes through the eras.

Monza has been synonymous with racing since September 1922 - 100 years ago. This wedding of two concepts, now indissoluble, has been threatened, left for dead, considered a relic of the past - only to return with more passion, more determination, more of a central role in our imagination. It's been here for 100 years and we hope it'll be here for 100 more.

So happy birthday, Monza. We're here to honour you in the way you most desire: by racing our hearts out on your hallowed ground.

To celebrate the unbreakable bond with the historical Autodromo Nazionale di Monza, where Nino Farina won its first Formula One title on September 3, 1950 onboard the Alfetta 158, Alfa Romeo is launching its first Tribe Days, an international event gathering the Italian brand's fans from all around Europe - the "Tribe", as the Alfa Romeo aficionados are known.

112 members of official Alfa Romeo clubs - one for each year of the brand's incredible automotive history - will take part in the event, each one represented by an iconic Alfa Romeo car. In a similar way, 100 Giulia GTA - one of the most successful models in the brand's history - will honour the 100 years' anniversary of Monza, the cradle of Italian motorsport.

The Alfa Romeo Tribe Days will culminate with two parades: the first one will feature 112 historic cars, led by Formula One CEO, Stefano Domenicali, and Alfa Romeo CEO, Jean-Philippe Imparato, and will be held on Saturday afternoon on the very Monza track where the F1 drivers would have been battling pole position shortly before. The second parade will take place the following morning, on the day of the Italian Grand Prix, when the 112 historic cars together with 100 Giulia GTA will depart from the Arese Museum - the historical home of Alfa Romeo - and drive through the city of Milan, birthplace of the brand, passing by some of the most iconic locations of the Northern Italian city and eventually reaching the Monza racetrack.

Frederic Vasseur, Team Principal: "We head to Monza this week for the final part of the triple-header and, more importantly, for our home race. It's been an intense and challenging two weeks of racing so far, and there's no denying we wanted more from Spa and Zandvoort, but we return to Italy with confidence, motivated to do well in front of our home supporters and a big contingent of our staff, who will be on the grandstands. The track will be different from Zandvoort, where we were on the back foot, so this is an opportunity to go back to something more akin to Spa where we were more competitive. Monza is an incredibile venue and it has delivered some incredible races in the last few years: hopefully there will be another spectacular Sunday this year to mark the 100th anniversary of the circuit."

Valtteri Bottas: "I am looking forward to racing again after two unlucky weekends: of course, this weekend is a home race for the team and for our title partner, Alfa Romeo, which makes it even more special. For a driver, Monza is one of the most iconic and unique tracks on the calendar, and I enjoyed racing here in the past: I have four podiums from Monza and this is one of the most impressive podiums you can hope to stand on! The atmosphere is incredible, and to have our colleagues on the stands makes it even more special. Hopefully we can make a step forward from the last few races and we can end the European leg of the season on a high."

Zhou Guanyu: "It is the final race of the triple-header, as well as the final European race before we head overseas for the end of the season, and it feels like this year is going by in a flash. We have had a couple of races where we didn't get to compete at the level we wanted, but this race is a new opportunity to regroup and work out on what we lacked last week in terms of pace and performance. It's a big weekend for us and we want to do well in front of our home crowd: also, having been with Italian teams during my junior career, Monza holds a special meaning to me; when I stepped on the podium last year in F2 I could feel the passion and the endless energy of the fans. The Italian Grand Prix will be an important event, both for us as a team and for the Alfa Romeo brand, but when the sessions start, I'll just focus on doing the best possible job and bringing home better results for the entire team. Sono pronto!"