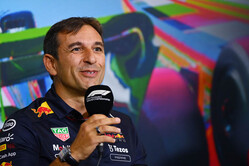 Tom, we will start with you a quick word. First of all, on the job that Nyck de Vries did yesterday in FP1.
Tom McCullough: Yeah, so he did a very good job. It's his first free practice one with us. He's obviously done a couple already this year. But he came to the factory, did the simulator work, did all the prep, works well with the engineers. We had different programmes between the two cars, he was using a different rear wing level, getting us some valuable data that we need, from an aero instrumentation side of things. But really solid job, overall good.

Let's talk about the performance of the car. Can you explain the trend of it being faster in race trim than it is over one lap in qualifying?
TM: Yeah, some teams obviously qualify stronger, some race stronger. I think as a team, we've always focused very much on the race performance. But if you start too far back in qualifying, it's hard as well. So that has been a recent focus of ours, trying to make sure that we can start a bit further up the grid. We managed to do that in a couple of events recently, which makes it much easier in the race when you're not having to come through from the back.

What are the issues in qualifying?
TM: Issues? That's interesting. So, fundamentally, the car balance, the grip, that's what's key, what drivers want, those two. So, to give the drivers a balance that they're happy to attack the car with, both in qualifying, but then also in a long run, has been a bit of a challenge. But I think it's something we're making headway into.

So, making progress, would you agree that you are now the sixth fastest car?
TM: We're in a very tight midfield bunch at the moment, track to track. Some tracks suit others, you know, better or worse than us. In Zandvoort, we were quite competitive; yesterday, we struggled here, so we weren't as fast as we wanted it to be. But overnight, the engineers have been working hard, both at the factory and here. We're hoping to be a little bit more competitive, but often small margins between several teams, it's who gets it right on the day, really.

Now Tom, let's throw it further forward. Lots of excitement surrounding Fernando Alonso joining the team next year. What are you expecting from him? And has he started work already? Is he coming down to the motorhome, talking to you guys?
TM: So, he hasn't started with this yet, but obviously, watching him from the outside this year and last year, he's particularly competitive and really wanting to do well. We see the job he's doing at Alpine week-in, week-out, really looking forward to getting him into our team and see what we can learn with him and how he can help continue to drive us forwards.

But what do you expect from him?
TM: I expect him to be there, week-in, week-out, getting the most out of the car in qualifying, racing really well. He's a very tenacious racer: you saw last weekend in Zandvoort, at one point, the way the timing of the Virtual Safety Car and Safety Cars had gone, he found himself in the middle of a tight midfield bunch on older Soft tyres than others - but he still comes out looking pretty good. So yeah, real good racer, is one of those drivers who, over the years, has often scored maybe more points sometimes in the car deserves - and the real class drivers always do that.

Pierre coming on to you now. Can we start by talking about grid penalties? Both your guys are going to be taking some this weekend. Can you explain the reasoning behind the changes that you're making?
Pierre Wache: Yeah, I think Sergio's penalty was planned, because we have to take a penalty before the end of the season. And the first penalty you take is 10 places on the ICE. This one, we didn't want to take both cars in Spa; Zandvoort was difficult, then we planned to do it Monza. And based on our pace and predictions, we said maybe could be good to have a backup option for Max, that we take another penalty for Max, it's only five places. Here it is possible to overtake. It's a little bit more difficult than Spa, but this is the rationale behind.

So, still possible to overtake. Wherever your drivers start on the grid, do you remain confident that you can win this race tomorrow?
PW: The confidence is lower than compared to starting first. But yeah, we have some confidence, some other teams are quite quick, and it will be a challenge for sure.

Can you talk to us about the strength of your car? Why is it so effective on this kind of racetrack, and I include Spa in that as well?
PW: I think the car is efficient at each track. Just when the track efficiency is going up, in terms of demand, our car comes to be working better compared relatively to the others. I think it's more in this way. I think high-downforce track, our efficiency is a little bit less an advantage, compared to others.

Now for all of Max's recent success, Checo's having a harder time of it. Is there a technical reason why his pace seems to have dropped a little bit?
PW: I think it is multiple factors but the main factor is clearly the car balance and the confidence with a car, compared to the beginning of the year when the car was a little bit more balanced for him and a little bit less for Max. And after the potential of development we put on the car during the season, move away from that, is maybe part of it. And after, finding a right set-up for him, it is quite difficult, to put him as confident as he could be to beat, or to fight with Max.

News broke recently that a potential collaboration with Porsche is off. Can we get your reaction to that news? And where does that leave you and your plans for 2026 and beyond?
PW: I think the plan for ‘26 was... even before the discussion that the company had with Porsche - because I didn't have a discussion with them - the plan was already in place. I think we clearly developed a new company to make engine for '26 and to create a project for, on this sense, for the '26 car and engine, after the discussion with Porsche happened. And, is off now, as you say, it is based on above me, and I was not part of the discussion. I'm sorry, I cannot really answer this one. It is how it is. We move on, and we try to do our best for the '26 car.

Andrew, we're going to start with grid penalties for you as well. For Lewis, can you tell us about the damaged power unit from Spa?
Andrew Shovlin: That power unit, we lost water pressure, and he switched it off, as you may have heard during the race. That's still at HPP and it's undergoing some detailed checks. We have had other issues with elements in the pool that haven't taken them out of action, but have certainly lessened our enthusiasm for racing them. We're obviously desperate to avoid a DNF and reliability has been one of our strengths. And just on the balance of probability, we think at some point in the remainder of the year, we would have been taking a penalty with Lewis, which was why we decided this will probably be a better track to take it at. Given that you've got long straights and some hope of overtaking.

You've been on a rollercoaster ride with the W13 during this triple-header. Just talk us through that ride, in terms of the issues that you had at Spa, why it was so much better at Zandvoort, and what we can expect from you here.
AS: Spa was quite interesting, it was quite painful at the time, but we've often said that our worst weekends are the ones that reward us with the most learning subsequently. And it certainly focuses your attention. And when you see these performance swings, track to track, you can start to see even with the GPS, which corners are you losing in what speed range, you can start to understand how your car's working. And you can get an insight into how competitors' cars are working. And the learning that we took from that does give us an indication of where we need to develop the car in future. Zandvoort, we were expecting to be more competitive. So it was reassuring that that that played out. But the issue is the problem is sort-of rooted in how we've developed the car, and how it's working as an aerodynamic package. And as such, you can't fix that in a fortnight. So again, we were anticipating that Monza would be a difficult circuit for us. We're hoping it won't be as tricky as Spa but this sort of downturn, we think principally come about from the changing in downforce level, track to track.

Next year's W14 is well underway back at the factory, what have been the overriding lessons that you've learnt from the current car?
AS: Those lessons, that learning is all quite valuable and we like to keep that within the team. It has been a very interesting journey, I think we were overly optimistic in where we thought we could run the car. The car that we launched had a lot of downforce close to the ground, and there were a lot of issues being able to actually run the car on track there. And I think that it's no secret in the pit lane that people have been trying to get their cars further off the road, to try and make them better able to cope with bumps, and then to avoid them hitting the ground, where you lose a lot of the grip once it's all going through the plank. But really just looking also at how the car is balanced through the speed range, through the different phases of the corner. And in general, we just haven't had enough performance on it. It's not just that where we had the downforce was in the wrong region, we're just behind on performance. So, there's a lot of areas that we've been working on. The focus this year, changed relatively early to one of learning, making sure we can get back to a competitive position for next year. And the signs that we've seen over the last six or seven races have been encouraging. We're not where we would like to be - but the direction of travel looks okay, so we're working very hard to try and improve that.