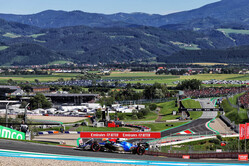 Dave Robson, Head of Vehicle Performance: We always enjoy the challenge of a Sprint Event Friday and today was no exception. FP1 was a bit disrupted and we also had to focus on race preparation, so we didn't learn a huge amount more about the new parts that we introduced on Alex's car in Silverstone. However, the driver comments continue to be positive and although we know there is more to do to understand - and optimise - the new package, we are confident that we have taken a step forward since Canada.

Qualifying is often tricky at the Red Bull Ring with 20 cars fighting for position on a track that is barely 4km long. Fortunately, Q1 was fairly smooth with both drivers having mostly clear laps and three good opportunities to set a lap time. Alex was able to make the most of the opportunity and the new parts and made it to Q2, finishing in 12th place. He again drove very well and pushed hard on his new tyres at the end of Q2. Nicholas's car is heavier than Alex's this weekend and he is obviously still driving with the Canada car specification, but despite this he drove well again, building on his impressive display in the wet last weekend. His team worked very hard to get everything out of his car today and although they succeeded in that regard, they are looking forward to getting their hands on the new package in France.

Thanks to all the hard work and dedication of the team back in Grove, all of whom worked tirelessly to ensure that we had enough parts available in Austria, we have had an enjoyable day today. However, there are still two days left to go and plenty of opportunities to make and lose places; although the cars are now in Parc Ferme, we still have a lot of work to do if we are to maximise our chances in the sprint race and the grand prix.

Alex Albon: I'm very happy. Firstly, the team did a great job to get everything ready after the damage from Silverstone; they worked flat out at the factory and here at the circuit, so to repay them with a P12 is great. We have obviously brought an upgrade and it's nice to see the performance increase because of it and I hope we can progress forward each weekend. We were only a tenth away from Q3 - it's almost frustrating as you can always think of places you could have improved - but I'm very happy. I think it's all to play for tomorrow.

Nicholas Latifi: Even though the position and lap time were not good enough, I still felt good behind the wheel carrying over what I felt in Silverstone. I made a mistake in Turn 3 but with that, my lap time and how much the upgrade should give, I should be quite a bit slower than the other car. I think I'm actually right where I need to be, so for me that's two strong Qualifying sessions in a row which is nice. Honestly, I'm happy with that because I know what the gap should be and where we need to be. The car is still struggling around here but I'm happy that I've found a little bit more driveability. I more optimistic going into the Sprint despite the lack of pace. Hopefully there will be some opportunities tomorrow.

Check out our Friday gallery from Spielberg here.