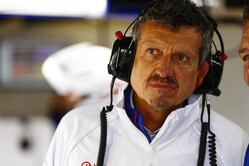 Guenther, today we're going to start with you. You got some decent mileage with both cars yesterday afternoon. How's the car performing around here? And in what areas have you still got work to do?
Guenther Steiner: We have got work to do in all areas, I would say, but yesterday we weren't as fast as we would like to have been, but we had this in the last races on the Fridays; we weren't where we wanted to be, but normally we come up with some solutions for Saturday. So, we really look forward to going out now and seeing what we can do today.

And what about the performance of your drivers? Let's start with Mick. He had a very strong weekend, last time out in Canada, particularly in qualifying. Do you see that race is a bit of a breakthrough one for him?
GS: I hope so, unfortunately, we had a mechanical issue in the race. So, he could have been in the points and he should have been in the points but unfortunately, the car stopped out there. So, I was hoping that he makes his first point so he gets over that hurdle of making the first points and then just a little bit more relaxed. But I see he's in a pretty good state at the moment, you know? A lot better, a lot more in tune now, driving in the team with Kevin, which is doing a good job. So, they work very well together. And it's just like, we need to get over the hurdle of his first points.

Do you think he's feeling the pressure of having no points?
GS: I think he felt it more in the beginning than now, because obviously, also Kevin didn't score points at the last races. But I don't think that's the reason: is just like he's now focusing, he knows that he can do the points, we just need to get a little bit more lucky and just bring a race weekend to the end, because either we do a good race or we do a good qualifying, we never put it together. So, I think now he has got the confidence that if he puts himself in a good spot on the starting grid after qualifying, that he can get into points because he showed in Montreal, in the race. He was there: he was mingling there in the midfield. So, you know, I think he got that confidence. He just needs the points to prove that it is doable.

Andreas, coming to you now. First up, how's the intra-team rivalry at McLaren? I'm assuming there's been a ban on space hoppers in the motorhome? Is that right?
Andreas Seidl: Yeah! I've seen the video, at least. But I didn't get any red lights or alarms from our team doctor, so I assume everything is in good shape with both drivers. No, I mean, if you say also, being in charge of the team, how Daniel and Lando are working together in order to keep pushing the team, together, moving forward, I'm very happy how this relationship is going at the moment.

Now, what about performance this weekend? It was a strong showing yesterday. And of course, there's a strong showing last year at this race as well. Are you confident that you can maintain this form as we get into the business end of this weekend?
AS: Yeah, as you said, yesterday was definitely a good start into the weekend here. I think on paper, different to the last two weekends, where we definitely struggled. This track should suit our car more. And now it's simply important to, let's say, keep up this positive momentum that we have seen yesterday, and carry forward today in Free Practice Three and Qualifying because, what we need now simply after two challenging weekends is getting back into Quali Three with both cars and getting back in a position to fight for good points on Sunday, because that's what we need in order to make sure we keep fighting for this P4 in the Constructors' Championship, where we still are. But we obviously want to stay there until the end of the season. I think we have everything in the team, together with Daniel and Lando, to do that, and that's the focus.

You have everything in the team - but what about upgrades? Because the team has said it's putting the handbrake on upgrades due to the budget cap? Why is that the case at McLaren, when other teams are bringing new parts a lot of the time?
AS: Well, obviously I can only judge what I see on the McLaren side. And in the end, each team has to make its own plans of how it wants to deploy upgrades throughout the season. We have a clear idea of, let's say, how the second half the season will look like, in terms of the development of the car as well. As you will know, there are some parameters you have to manage throughout the season. One thing is obviously the cost cap, with the known, let's say challenges, we are all in at the moment, with how the world is going. At the same time, you need to also manage how to use your wind tunnel time that is quite limited. And at the same time, I think we still have a car at the moment, or a package, which we upgraded quite a bit at the Barcelona race weekend, where we can still be quite competitive and fight for this P4. So, that's the bigger picture. And obviously we need to see now how we then move forward throughout the rest of the season as a team.

Mike coming to you now, significant upgrades on the W13 this weekend, how are they performing?
Mike Elliott: So far, so good. I think obviously, we lost the best part of P1 with the weather, we got some running in P2. I think generally we're happy with what we've seen. I think the upgrades have delivered what we wanted. They're not a miracle that's suddenly going to jump us to the front of the grid but I think they're a good step in the right direction. And I think what's pleasing for me is that we've been able to develop those, and bring them without making any of our problems worse, some of the bouncing problems we've seen early in the season. So, hopefully, our understanding there is improved and we can keep chipping away and keep moving forward from here.

You say these upgrades have delivered what you wanted. What did you want from them? What areas of performance have you focused on?
ME: I think it's quite obvious, looking at the car, we made quite a big change in Barcelona to the way we were trying to use the aerodynamics. And in doing so we made some good inroads into the bouncing. But we did that by probably compromising some of the bulk aerodynamic performance of the car. So, this was really about trying to bring that back; trying to add performance to the car and just generally move it forward in lap time. And the aim was to do that without compromising bouncing or any of the other sort of negative side effects that we could have got.

Christian Horner thinks you can win the British Grand Prix this weekend. What are your expectations?
ME: I hope he's right! We're realistic. I think we had a decent showing in the short run pace, but I'm sure Ferrari and Red Bull have still got more to come. I think the long run looks pretty encouraging. But again, there wasn't a huge amount of laps done and I think it's difficult to judge from that. I think if we've made a decent step forward in pace, I think we'll be happy with that, and we can keep chipping away and keep building from there. A win on Sunday would be really nice, but I think that's probably a little bit far for us.

(Keith Collantine - racefans.net) Mike, the FIA has issued details of the new restriction on porpoising it's going to bring it in a couple of races time. Would Mercedes have been in danger of exceeding that limit in races earlier this year? I'm thinking particularly of Baku, and what's your understanding of what the penalty for that will be if it happens again in the future?
ME: Well, it's obviously early days, I think that's come out as a draft TD that doesn't come into effect until Ricard. I think, from what we've heard from the FIA, I think it's something they're going to have to sort of work on and build and work out how that's going to work pragmatically. I think Baku - we're going back through and looking at the races using that metric - Baku is one we wouldn't have passed. If you looked at where we were yesterday, we wouldn't have even triggered the metric. So, I think it's difficult: it's going to be interesting to see how it is applied; how it's used through the season, because... none of us want to be bouncing, I'm sure colleagues here would say exactly the same thing, so we're not trying to develop into that position. And then the question becomes if you are exceeding the metric, can you actually fix it during a race weekend? Because I don't think any of us want to see cars not taking part or cars thrown out, because they're not able to get on top of those issues. So, I think time will tell whether that metric can be done in the right way, whether that can push teams in the right way without ending up damaging the show, but we'll see what happens. I'm sure the FIA are conscious of that.

Mike, with regards to bouncing, are the worst circuits behind us now?
ME: My view is that there's a couple of different versions of bouncing: there's an aerodynamic bouncing, which is where the aerodynamics are inputting energy; and there's a version of bouncing, which is because these cars are really stiff. They need to be stiff to run close to the ground. And I think what we've seen is different circuits have different effects. And certainly, the last few circuits where we've seen quite a lot of bouncing, I think it's just because the circuits are quite bumpy and with very stiff cars. And I think when you look forward, you'd say, Budapest might be challenging for teams for the same reason. But at the same time, I think we're all getting on top of our issues. We're understanding those issues and developing the cars. So, hopefully, we can move away from that.