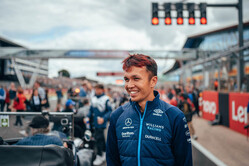 Williams driver, Alex Albon has been released from hospital following his crash in the opening moments of the British Grand Prix.

The youngster was the 'innocent victim' of the early clash involving George Russell, Pierre Gasly and Guanyu Zhou. As Valtteri Bottas braked in a bid to avoid the incident ahead, Albon slowed but was hit by Sebastian Vettel who was running behind.

The Williams nose-dived into the pit-wall before bouncing back on to the track only to be hit by Esteban Ocon.

While attention focussed on Zhou, who was trapped upside down in his car, Albon informed his team that he was "OK".

Taken to the circuit's medical centre for precautionary checks it was subsequently decided to send him to Coventry Hospital for further checks.

Several hours later, the youngster was given the all-clear.

"We are pleased to confirm that Alex has been given the all clear and has been discharged from Coventry Hospital," said Williams in a subsequent statement.

"Thank you to everyone for your well wishes."

Taking to social media, the Anglo-Thai driver subsequently confirmed that he - and his pets, all of whom were sported on his helmet this weekend - were OK.

"All ok, the pets are ok," he tweeted, "but more importantly I'm glad Zhou is ok! Thank you to the medical staff and for all the messages. Eyes already on Austria."

I'm very glad that everyone else involved in the first lap incident is okay. Thank you to all the medical staff at the track and Coventry Hospital. It's a shame our race ended before it began today, but we are already fully focused on Austria. Bring on the next one."

Team boss, Jost Capito subsequently revealed that Albon had admitted that the impact with the pit-wall had been hard.

"He's a bit sore," admitted the German. "We'll see how he is tomorrow.

"It's a big relief," he continued. "For me, it's the most important thing, everything else is not valid anymore.

"His physio went with him to the medical centre, and we had all the updates, and it's fine now. He had some pain in the back, so then you have to be careful.

"You see how important it is to work on the safety again, and again. Alex didn't look that bad, because the hit from behind was never a big deceleration. And then you go far and spin, then you get rid of energy, so it's not stopping. But the pit wall was the hard thing that he felt.

"That's racing. You can't be frustrated with it. The main thing is that the guys are all healthy and walked away, then everything else doesn't matter."