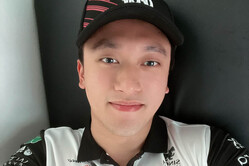 Guanyu Zhou has praised the Halo following his horrific crash in the opening moments of the British Grand Prix.

Barely seconds after the race had got underway, the Chinese driver was caught up in a battle with Pierre Gasly and George Russell.

As they headed towards Abbey, the opening corner, the Chinese driver's Alfa Romeo was hit by the Mercedes which had been hit by the AlphaTauri.

While the race was red-flagged the process began to try and extricate Zhou from his car which was now wedged between the safety barrier and the catch fencing.

As the operation to rescue the driver continued there was a worrying lack of information, as the world held its breath.

Eventually, his team confirmed that the driver was ok and had been conscious throughout his rescue ordeal, the youngster applauded as he was finally extracted and taken away in an ambulance to the circuit's medical centre.

Shortly after the end of the race, his condition now confirmed by both his team and the FIA, Zhou, looking none the worse for his ordeal, was spotted talking to F1 boss, Stefano Domenicali.

In a subsequent press release the Chinese driver praised the Halo, the marshals who rescued him and the circuit's medical team.

"It was a big crash and I'm glad I'm okay," he said. "The marshals and the medical team at the track were fantastic with their quick response.

"I also owe my thanks to the FIA and F1 for all the work they have done, and they keep doing, to improve the safety of our cars.

"The Halo saved me today," he added, "and it goes to show that every step we take in improving our cars has real, valuable results.

"I'm keener than ever to get back on track and do what I love," he continued. "I'm fit and I'm looking forward to Austria next week."

He subsequenty took to social media to thank fans for their concerm. "I'm ok, all clear," he tweeted. "Halo saved me today. Thanks everyone for your kind messages!"

"I think we can all agree that the most important thing today is seeing Zhou come out of such a huge crash without any injury," added team boss, Frederic Vasseur. "What we witnessed were dramatic scenes, and once again we have to thank the great improvements in safety spearheaded by the FIA and F1 for a positive outcome.

"The work to improve safety in our sport is never done and today reminds us of just how important this is," he noted. "Zhou is ok and fit to race in Austria next week, and this is the big victory of the day."

Earlier in the day the Halo almost certainly saved the life of F2 racer, Roy Nissany who was involved in a similarly horrific clash with Dennis Hauger.

As they battled for position, Nissany forced the Norwegian off-track as they headed into the Club chicane. Hauger, having suffered a broken front-right wheel, which instantly deflated his tyre, went off and over the grass run-off, a mere passenger unable to control his car as it returned to the track at high speed.

As it returned to the track the car was launched over the sausage kerb towards Nissany, who was now exiting the chicane. Hauger's car landed on top of Nissany's, in an incident not entirely dissimilar to the Verstappen/Hamilton clash at Monza last year, albeit at higher speed, before both cars came to a stop.